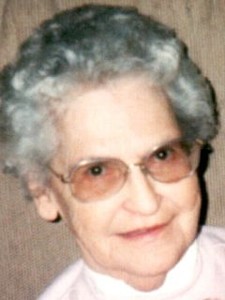 She was born on May 20, 1929 in Winnipeg, Manitoba, Canada, the daughter of Louis and Adele (Persian) Laramee.

To this union four children were born.

The Birkys lived in Delavan, IL for seventeen years and moved to the farm in Wyaconda, MO in 1964.

Georganna worked at both the Clark County Nursing Home in Kahoka and the Scotland County Care Center in Memphis as a certified nurse’s aide. She was also employed in the Recorder’s Office at the Clark County Courthouse and as a librarian for the Wyaconda School system. She was last employed for the Community Action Agency through Heartland at Kahoka until she stayed home to take of her husband due to his failing health.

Georganna was a member of the Disabled American Veterans Auxiliary. She enjoyed crocheting, gardening and being on the farm raising cattle with her son Jake’s help. Spending time with her grandchildren and great grandchildren was also special to her.

Preceding her in death were her parents; two sisters, Rose and Irene; and two brothers, Roland and Peter.

Condolences may be sent to the Birky family via email at [email protected].

Arrangements were under the direction of the Gerth Funeral Service from their Wyaconda chapel.