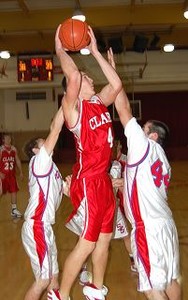 Both Clark County teams came up short on the road at South Shelby on Friday.
The Lady Indians fell behind in the first quarter of their matchup against the Lady Birds, and scoring only five first quarter points against the Lady Birds’ 18.  At the half, the Lady Indians trailed 24-9, as Clark County struggled to get anything through the hoop.
The Lady Indians scored six in the third quarter, and ten more in the final period, but South Shelby coasted to an easy 49-30 win.
Clark County was led by Amanda Winters with 11 points, followed by Brittany Logsdon with seven. Kassidy Shuman and Brenna Buford had five points each, and Daryle Goldie and Britni Bertelli each added a free throw.   The Lady Indians are now 2-4 on the season, heading into conference play at Knox County on Thursday night.
In boys action, fans saw a terrific matchup between two fast-paced teams.
Both teams hit the floor hard and fast in this game, each scoring 17 first quarter points.  The Cardinals took a 36-34 edge into halftime.
The second half saw more excitement, as Clark County hung with the hot shooting Cardinals, but in the end, South Shelby won 78-68.  The Cardinals nailed 12 three pointers and hit all 18 of their free throw attempts.
The Indians were led by another strong performance by Colt Sommers, who scored 22 points.  Javis Vineyard added 14 more, and Michael Brennan was in double-digits with 10.
Scott McAfee got eight points, and Bryan Plenge added six.  Lynn Williams scored five, and Ethan Allen added a three pointer.
The Indians are 2-2 on the season, and take on the Knox County Eagles on Thursday in Edina.