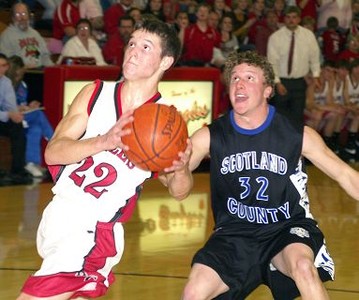 By David Sharp
Ball pressure defense coupled with strong overall play lifted Knox County (3-1) to a dominating 63-23 victory over Scotland County (3-2). Knox County scored the game’s first 25 points and never looked back.
Travis Trueblood fought through a hard nosed interior defense for the first Scotland County bucket with four seconds remaining in the first quarter, setting the score at 25-2 after one period of play.
The home team outscored their conference rival 16-10 in the second quarter for a 41-12 halftime lead. Knox County continued the onslaught in the third quarter.
Knox County made liberal use of their bench during the second half. Daniel McMahon pumped in 11 of the Eagles’ 18 third quarter points. McMahon scored a game high 32 points and recorded five steals on the night.
Daniel McMahon was later named the Hawkins Insurance, KRES radio boys’ player of the week for his effort in the Scotland County game, and in a conference victory at Brookfield.
"We played hard. We knew coming in that this game wasn’t going to be an easy one," said senior guard Daniel McMahon. "We executed well. We see this as a stepping stone to our success. We aren’t satisfied. We want to keep getting better and play for something bigger down the line."
McMahon credited KCHS assistant coach Ryan Waters for the Eagle’s improved conditioning and ball pressure defense. "We have lifted weights and worked our (behinds) off for this. All the credit goes to Coach Waters. He showed us this defense." Knox County put in 19 field goals and held the Tigers to four two pointers during the non-conference contest.
The Eagles had 13 team steals and dished out 13 assists on the night. Returning conference MVP Cody Musgrove played on an injured ankle, and led Scotland County with nine points. Both teams sank 13 of 16 free throw attempts on the night.
Knox County took a 59-17 lead into the fourth period. The clock ran continuously by the Missouri Mercy Rule. If a team leads by 30 or more points in the fourth quarter, the mercy rule takes effect.
Dennis Dent scored 16 Knox County points, pulled down 11 rebounds and blocked three of the Eagles’ four shots. Dent is currently averaging a double-double after four games.
"The whole team played well tonight. Our prize is coming in March. Rankings and everything are nice but we are looking to go as far as we can go," said Knox County coach Jesse Crawford. "Daniel McMahon and Dennis Dent played great tonight. We have to have a good practice tomorrow, and never be satisfied with what we have done. We have good talent, but there are still things that we need to improve on."
"Scotland County was in the district championship game last year, and has three starters back. Anyone can play one good quarter. A good team can come back. We wanted to put four quarters of good basketball on the floor," said Coach Crawford. "
"Coach Ryan Waters has brought a lot off good things to the table," said Crawford. "He has preached man to man defense. Our defense is much improved over last year. We maximize effort in practice and make them compete with each other. If we can make it out off the week we have coming up 3-0, then we can legitimately talk about being one of the best teams in the state."
Cory Shultz scored seven points, pulled down nine rebounds and dished out four assists. Mitchel Penn scored four points and had six rebounds. Shane Clouse scored two points along with a blocked shot and four rebounds. Knox County pulled down 36 team rebounds.
Brett Wilkerson and Cody Morgenstern added one KCHS point each. The Eagles go into the final week before the Christmas Break with an opportunity to firmly establish themselves as one of the top Class 2 boys’ basketball teams in Missouri.
Knox County hosts defending Class 3 Sectional champion Highland on December 17. The Cougars were hit hard by graduation, but stayed within six points of Bowling Green last Friday night. The Bobcats will likely be ranked in the state this week. Bowling Green returns most of their key players from a final four run last season.
Cougar players to watch include guards John and Josh Mims along with Kyle Ellison. Highland has a solid returning inside presence in Tad Luebbbehusen. The Cougars handed Knox County a 36 point loss the last time Highland and Knox County played a varsity boys’ basketball contest.
The Eagles host a rebuilding Novinger team on December 18. Knox County has a key conference battle with Clark County (2-2) on Thursday, December 20 at Knox County.
The Indians have played a murderous early schedule. Clark County stayed in the game at South Shelby with another likely Class 3 ranked ball club. The Indians have two good inside players in Colt Summers and Michael Brennan. Clark County has outside weapons in Brian Plenge and Ethan Allen.
Knox County and Clark County were considered two of the top boys’ teams in the Tri-Rivers Conference heading into the 2007-08 season. The Highland and Clark County games are scheduled to be broadcast on KMEM Radio, 100.5 FM in Memphis, Mo.