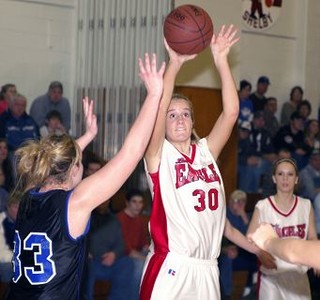 Scotland County (2-4) got out to an early 9-4 lead during Knox County’s 2007-08 varsity home opener on December 14. Lady Eagle scoring attempts found the mark, and Knox County played lights out defense for a 54-29 victory. Knox County outscored their guests by 30 points after the midway point of the first quarter.

Knox County (2-2) clawed back with good team execution on both ends of the court. Amanda Woods played her second game of the season after missing the first two due to knee surgery. Woods scored at the one minute mark putting Knox County on top by a 12-9 score.

Melissa Cotton tied the score at 12 with a three ball at the 47 second mark of period one. Cotton connected again with 16 seconds remaining in the opening period, putting Scotland County ahead 14-12 after the first quarter of action.

The Lady Eagles began reeling off some of the best overall team basketball a Knox County girls team has displayed in years. Knox County popped off an 11-0 run to a 23-14 lead. Amanda Woods singed the net with a 15 footer at the 2:59 mark of the second quarter capping the streak.

All conference guard Kirsten Johnston drew a three free throw foul for Scotland County. Johnston converted all three chances for a 23-17 KC lead with 2:47 showing on the second quarter clock.

Jessica Bair hustled in front of a Lady Eagle rebounder and drew a foul 12 seconds later. Scotland County missed the first of two front ends of one and one free throw chances during the first half.

Knox County worked for good shots and finished them. Lorrie Peters tossed in a ten footer for a 27-19 lead with 1:53 to go until intermission. Knox County scored six of the last eight points tallied in the first half. The best was yet to come for Lady Eagle fans.

The Lady Eagles came out of the dressing room breathing fire. Tessa Ramer took a sharp looking pass and sank a two pointer for a 33-21 Knox County lead at the 4:30 mark of the third quarter.

Knox County began throttling their guests on the defensive end. The Lady Eagles took the basketball away at least four times during the second quarter along their defensive baseline. Knox County recorded 11 steals on the night.

The energized Lady Eagles pressured the basketball all over the court.  Scotland County point guard Kirsten Johnston was playing with a hip injury, no doubt adding to the KCHS advantage.

Katie Ausmus canned a three ball for a 38-21 lead with 3:28 showing on the third quarter clock. Katie Ausmus delighted about three quarters of the near capacity gathering with a steal and another Knox County field goal.

Knox County held a 40-21 lead with 2:21 to go in period three. Knox County had cracked off another 11-0 run. This time it was starting off the second half.

“They took the ball away from us, but most of the time we handed it right to them,” said Lady Tiger coach T.J. Young. “We just didn’t play very well. Give them credit, they (Knox County) played a heckuva basketball game and we didn’t show up.”

Knox County wound up outscoring the Lady Tigers 25-8 in the second half. Kirsten Johnston and Melissa Cotton led Scotland County with five points each. The Lady Tigers went 5-12 at the free throw line. Knox County held a 19-9 edge in field goals. Both sides tallied a pair of three pointers.

“We knew we had to come out and play hard if we wanted to win,” said Knox County junior guard Tessa Ramer. “Nobody was getting open at Brookfield. When we get open shots, we have to score. We needed this game. It felt awesome to go out and beat Scotland (County,)”

The Lady Eagles dished out 17 team assists. Stacy Leckbee came off the bench and passed around nine assists along with two points. Eight Lady Eagles had steals. No one player had more than two of the team total of 11 during a great team defensive effort.

“If we are going to win basketball games, it’s going to have to be at the defensive end of the floor,” said Knox County coach John Weaver. “Defensively, we did what we needed to do. We held them to eight points during the second half. Our defense helped our offense flow a lot better. Tessa Ramer stood out tonight. She had 19 points and she didn’t overshadow people.”

“Amanda Woods and Becca Mallett stepped up with ten points each,” said Coach Weaver. “It truly was a team effort. It was nice that we could put four quarter together.”

“In our first four games we are 2-2. We have gotten the shots we wanted offensively in all four games,” said Weaver. Tonight we set good screens. The defense made our offense better. Anytime you can get big rebounds, get the stops and carry it to the offensive end of the court it is big for you.”

The Lady Eagles have three tough games before the Christmas Break. Knox County hosts Highland on December 17. The Lady Cougars have quick guards and a formidable inside presence. Players to watch for Highland include Samantha and Jessica Murfin along with Shawna Kriegshauser and Ashlan Knoche.

Returning all district center Katelyn Brawner leads Novinger into a KCHS home game on December 18. Knox County goes back into conference play when they host Clark County on December 20.