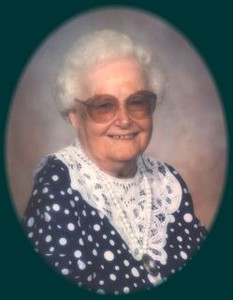 She was born May 2, 1917 at Lorens, IA, a daughter of Jerry and Geneva Pickett Dodson.

She married Raymond R. O’Banion on April 19, 1937, at Danville, IL. They both worked for Catepillar in Peoria, where they made their home. In August of 1949, he died in a tragic airplane accident while performing stunts.

Survivors include her sister, Margaret McCarty, of St. Francisville, MO; sister-in-law, Anna Marie Dodson of Keokuk, IA; as well as nieces and nephews and their families.

Bertha later went to work for American Can Co. in Chicago and lived there until the past four years when she moved to Wayland to be near family. She was a member of the Nazarene Church in Danville, IL and attended the St. Francisville United Methodist Church. She enjoyed working crossword puzzles and listening to country music. She loved being with family and the past four years were very special to her as she spent time on the go with Margaret and visiting with her nieces and nephews and other family members.

Graveside services were held Thursday, January 3, 2008, at 11:00 a.m. at Fon-Du-Lac Cemetery in East Peoria, IL. Memories and poems were shared by family members.

Serving as pallbearers were nieces and nephews.

Visitation was held after 9 a.m. Wednesday, January 2, 2008, at Wilson Funeral Home in Kahoka with family receiving friends from 6-8 p.m.