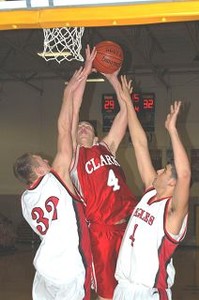 The Clark County Indians took the court at 9:00 p.m. Friday night against the Knox County Eagle, for third place in the Highland Tournament.
The opening quarter saw both teams struggle some on offense, as Knox County took the quarter 12-11. Brian Plenge had a 3, and Javis Vineyard had 4.
The second quarter saw Ethan Allen add 4 points, as neither team could settle down. Sommers played much of the first half sitting on the bench in foul trouble.
The third quarter saw the Indians settle down some, Colt Sommers did add 4 points to lead the Indians, then had to sit again with foul troubles again, but the Indians took the quarter 12-9, to hold a 30-27 lead.
The fourth and final quarter saw both teams come out like ball clubs, as it became a shoot out. With 3:30 left in the final quarter, Colt Sommers fouled out. Michael Brennan added 7 points, Ethan Allen also added 7, Javis Vineyard had 4, with the Indians holding a 50-48 lead. Knox had the ball with 9.9 seconds  and had to go the length of the floor, their final shot was short and the Indians claimed the third place trophy with a 50-48 win.
The Indians were led by Ethan Allen with 13, followed by Javis Vineyard with 10, Michael Brennan added 9, Brain Plenge had 7, Colt Sommers had 6, Lynn Williams added 3 and Scott McAfee had 2.
The Indians are 5-3 and will take in the Palmyra Panthers at home on January 8 .