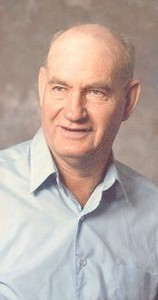 John had been employed with the Missouri State Highway Department for twenty-five years, retiring in 1979.

He was a member of the Christian Church in Canton, MO.

John was a loving father and grandfather and especially enjoyed spending time with his grandchildren reminiscing about the years past.

He was also preceded in death by four sisters, Helen Boerkel, Mary Vinal, Gertrude Schiver and Margaret Walter and one brother, James A. Roberson.

Funeral services will be held at 11 a.m., Thursday at the Vigen Memorial Home in Kahoka, MO with Pastor Dan Deatrick officiating.  Burial will be in the Providence Cemetery.

Visitation will be held after 1 p.m. Wednesday at the Vigen Memorial Home in Kahoka with the family meeting with friends from 6 – 8 p.m.

Memorials may be made to the American Diabetes Association.