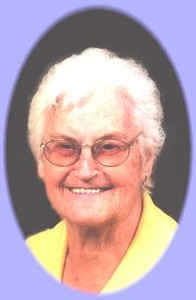 Mrs. Winkelman graduated from Steffenville High School and attended Culver-Stockton College in Canton, and Northeast Missouri State University in Kirksville, Mo.  She taught in the Steffenville and La Belle schools prior to her marriage. She and her husband lived on a farm at Wayland, Mo until they moved to Canton, Mo. in 1971.

She was a member of the Canton Christian Church, P.E.O., Dicey Langston Chapter of D.A.R., River Valley Country Club, Lewis County Nursing Home Auxiliary, and was active at the Canton Library, Arts Council, Chi Omega sorority, and other civic organizations.   She was a strong supporter of Culver-Stockton College.

She is survived by Barney and Marjorie Conrath of Palmyra, Va, John and Janet Winkelman of Alexandria, Mo, Joseph and Lowell Winkelman of Oxford, England, Scott and Jane Thomas of Claremore, Ok, Christine and Terry Glasgow of Monmouth, Il, James and Rebecca Boudreau of Quincy, Il, June Brenner of Lewistown, Mo, and Geraldine Glover of St. Louis, Mo.  She was preceded in death by her parents.

Memorials are suggested to the Lewis County Nursing Home at Canton, or P.E.O. and may be left with the Davis Funeral Home, P.O. 108, Canton, Mo. 63435.

Condolences may be left on line at www.davis-fh.com.