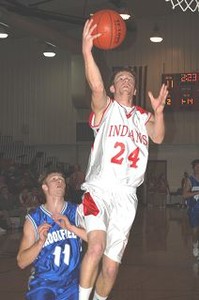 The Indians took on the Brookfield Bulldogs at home Friday night, January 11.
In the opening quarter Brookfield looked as though they came to play. The Indians’ Bryan Plenge led the charge in the first with 3 treys. Ethan Allen had 5, but the Bulldogs, Colby Balley also hit 3 threes, and Brookfield took the quarter 20-16. But the Indians were not going to stand for that, Michael Brennan scored 7, Javis Vineyard and Colt Sommers had 4 each and Clark County took the second 18-5 to lead 31-25 at halftime.
The third quarter saw the Indians take over, and put the game away. Brennan had another 6, Plenge, vineyard and Sommers each had 4, and the Indians took a 23-12 and a 57-38 lead into the final quarter.
In the final quarter coach Smith moved up two JV players and put them and his bench in and they responded by outscoring the Dogs 10-8, to move their Conference record to 2-0, and 6-4 on the season.
The Indians were led by Bryan Plenge with a game and season high of 18 points, followed by Michael Brennan with 13, Javis Vineyard added 10, Colt Sommers had 8, Ethan Allen had 5, Scott McAfee 4, Ethan Horton, Ryan St. Clair had 2, and the new Indians, Justin Oilar and Justin Alderton added 2 each.
The Indians will play again January 15th at 9:00 in the Palmyra Tournament.