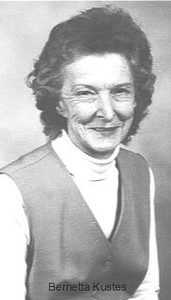 She was born on April 1, 1922 in Donnellson, IA, the daughter of Osborn  L. “Happ” Kincaid and Bertha Jones Kincaid. She was united in marriage to Irvin Boyer and was later divorced. She later married Vincent Kustes and he preceded her in death in 1965.

She was employed in the 1940’s at the Keokuk Pickle factory and had been retired for many years. She had lived in Alexandria, MO with her sister Vera for many years, however they lost their home in the great flood of 1993, and then moved to Keokuk.

Aunt “Nete” as she was fondly called by family and friends, loved her life, her family and her friends. She enjoyed reading before she lost her eyesight, and loved gothic horror and old scary movies. She had spent the last several months of her life in Keokuk with her caretaker and great nephew Vince Pepple, who survives.

She is also survived by her nephew Delmar L. “Gomer” Pepple and his wife Betty Lou of Keokuk, a great nephew, Terry Pepple, his wife Tammy and their two sons, Joshua and Caleb of Camby, IN, and great niece, Tabatha Pepple of Omaha, NE, a nephew Tony Kincaid and his wife Linda of Muscatine, a niece Carole James also of Muscatine, 11 step-nieces and nephews, 3 great step-nieces and nephews, and several cousins. She is also survived by her longtime special friends, Charolette Pepple of Greencastle, MO, Mel and JoAnn Sapp of Keokuk, Margurite Gregory of Kahoka and her neighbor Mert Cummings of Keokuk.

She was also preceded in death by her parents, her first husband, a brother William “Buck” Kincaid and his wife Mary of Muscatine, two brothers who died in infancy, Jackie and Noel Lee Kincaid, and her sister Vera Smoot.

In accordance with her wishes, her remains have been cremated and a gathering of remembrance for family and friends will be held at Vigen Memorial Home in Keokuk at a later date.