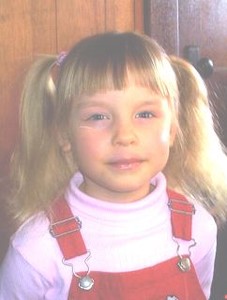 FELICITY A. AND TAYLOR M. BALL

Taylor or "tater"(tot) was known for her big blue, wide-open eyes which could be mischievous at times. When that happened she was either doing it or thinking about doing it. She was full of energy and full of life and loved picking on her sister, Felicity. She was also a big Dora fan and loved to "shake her booty" whenever there was music playing. Taylor never met a stranger and said "Hi" to everyone she saw. Even though her vocabulary was limited, she never had problem getting her point across. She loved fleece, soft blankets, and dragging them around. She and Felicity were both Daddy’s girls and there was never a dull moment when they were around. They loved their new little brother and both had a way of lighting up a room whenever they came in. People never forgot them when they met them.

Felicity, also known as "Lissy Lou" and sometimes referred to as "Calamity Jane", touched everyone she knew. She had an imagination that wouldn’t stop and educated all her grandparents. She was a student at Kahoka Head Start and was wise beyond her age. She knew big words and how to use them appropriately. She helped other students in class and loved helping her family and grandparents do anything – garden, work puzzles on the computer, tend flowers, or whatever they were doing. She loved to hunt with her dad, go 4-wheeling, dirt biking, and ride her mule. She was a real "river rat" and loved to go boating and bowling. She also loved to watch Nickelodeon and eat popcorn and baby carrots. She and Taylor both loved to be read to. Their light will always shine in the hearts of those that know and love them.

Funeral services were held Thursday, January 17, 2008, at 2 p.m. at Wilson Funeral Home in Kahoka with burial Pastor Shawn McAfee officiating. A poem was read by their uncle, Derek Bollin, and an original by their aunt, Stormy Leazer. Special music was recordings

Visitation was  9 a.m. Wednesday with family receiving friends from 6-8 p.m.

Memorials in lieu of flowers are suggested to the family.