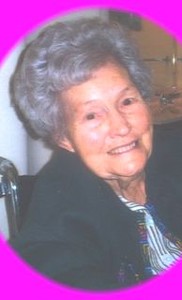 She was born October 9, 1918, in Nishnubolma, MO, a daughter of Grover and Bessie Huffman Neal.

She was preceded in death by her parents; her husband, Wilfred "Willie" Quick; a grandson, Nick Denham; and, five sisters and one brother.

Jerry and Willie and the girls moved to Kahoka in November of 1960. She spent several years volunteering at the Kahoka Nutrition Center.

Jerry loved playing bingo and cards, going to casinos, and her weekly shopping trip with her special niece, Barb. Most of all, she loved spending time with her daughters and their families and playing skipbo with her great grandchildren. She will always be remembered for her beautiful smile and her warm and loving ways.

Visitation was held from noon until time of services Saturday with family receiving friends during that time.

Memorials were suggested to the Jerry Quick Memorial.