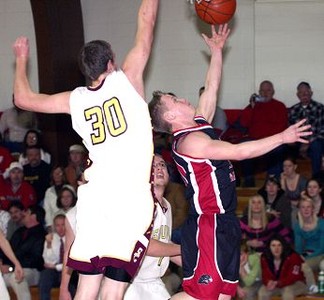 Knox County’s boys recovered from the disappointment of losing their championship semi-final contest to Marion County and claimed the third place award of the 2008 North Shelby Tournament by a final score of 58-54 over a scrappy Schuyler County Ram team. Both teams rallied from large deficits to take first half leads.
Schuyler County (7-6) came out of the gate strong and scored the game’s first five points. The Eagles played better during the latter portion of the opening period.
Cory Shultz drilled a 15 footer cutting an early Ram edge down to one point at 11-10 with ten seconds to play in the first quarter. Zach Parrish slashed down the lane and converted a Daniel McMahon steal to a bucket and a 12-11 KCHS lead with 7:08 showing on the second quarter clock.
The Eagles (9-6) rode a take away defense for 11 straight points and lead 21-11 at the 4:30 mark of the second period. Shane Clouse finished off a Dennis Dent feed for the ten point advantage.
Schuyler County fought back with a 7-0 run and trailed 21-18 with 2:30 remaining in the first half. Dennis Dent answered Tim Gorman’s two free throws with a charity toss ten seconds later for a 22-18 lead.
Cory Shultz delighted the large Knox County following with a leaning bucket at the 1:48 mark of the first half. Knox County led 24-18. Greg Buckallew scored a Ram basket late in the half. Daniel McMahon ripped a ten footer at the buzzer for a 28-22 Knox County lead at halftime.
Knox County played a strong third quarter on both ends of the court, outscoring Schuyler County 21-13 for a 49-35 lead. Lucus Hudson came off the KCHS bench and contributed seven third quarter points. Hudson probably played his best game in a KCHS varsity basketball uniform.
Schuyler County trailed 30-27 when Jacob Winkler scored a put back bucket with six minutes remaining in the third quarter. Zach Parrish lit the fuse for an intense KCHS rally with a three ball 19 seconds later.
The Eagles scored the last 11 points of the third quarter. Lucus Hudson sank a three pointer during the period. His offensive rebound basket at the buzzer finished one of the most dominating stretches of boys’ basketball this reporter has witnessed this season.
"We wanted to play LaPlata for the championship, but we were upset by Marion County," said KCHS junior Dennis Dent. "It took us a little while to get going. But we decided we would rather take the third place trophy and have a 9-6 record than go home and be 8-7."
Jacob Winkler ignited a Ram rally with a three pointer at the 6:29 mark of the fourth quarter. Knox County led 51-41. Winkler led the Schuyler County comeback attempt and tossed in another Ram home run ball with 2:38 showing on the fourth quarter clock.
The determined Rams who cut the Eagle lead to 57-52 interrupted the anticipated Knox County win. Jacob Winkler made it a one possession game with a pair of free throws at the 1:52 mark. Knox County took care of the basketball and finished the game strong. Schuyler County was within a 57-54 margin after the Winkler free throws.
Daniel McMahon gave the Eagles breathing room with a free throw. There were 28 seconds showing on the clock and a 58-54 Eagle lead. Schuyler County missed a three pointer with eight seconds to play in the game. Daniel McMahon ripped down the rebound.
Zach Parrish picked off a pass with four seconds remaining, sealing the 58-54 victory. "We just took the ball to the hoop and scored," commented Lucus Hudson on the third quarter rally. "We are getting better at rebounding."
Jacob Winkler scored a game high 24 Schuyler County points. Freshman Tim Gorman tossed in 16 Ram points. Schuyler County was 13 of 17 from the free throw line on the night.
"We were down 14 points and came back to a one possession game," commented Schuyler County coach Kyle Windy. "You can’t ask any more than that. We are a young team. They played hard. There are some big boys out there for Knox County. They have put their time in the weight room. They killed us on the boards. We are just not there yet."
Dennis Dent led the Eagles with 21 points. Knox County had good balanced team scoring. Zach Parrish, Cory Shultz and Daniel McMahon scored eight points each. Lucus Hudson finished with seven points and a very good floor presence. Mitchel Penn scored four points and Shane Clouse added two points.
Knox County was 7-13 from the free throw line and 1-4 in the fourth quarter. Three different Eagles sank three point shots. "We came away with a trophy, but it was not the trophy we wanted," said Eagle coach Jesse Crawford.
Pretty much the whole community and the surrounding counties were looking forward to seeing Knox County and LaPlata play for the championship tonight," said Crawford. "We let our fans down, and we let our program down on Thursday night. I knew it would be tough to get up for this game."
"We knew Schuyler County was going to be tough," said Jesse Crawford. "Jacob Winkler is one of the best if not the best all around players in the area. Every game on our schedule matters. Every game will result in a win or a loss. We definitely had some positives. We got out in transition today. We got some plays out of Lucus Hudson. He gave us 12 or 14 great minutes."
"We have other guys we want to get in there and develop," said Crawford. "Basketball is a long season. We have to get better each and every night."