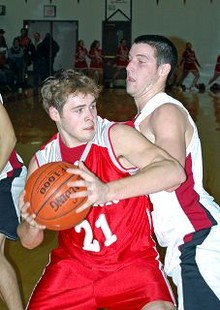 The Clark County Indians followed the Lady Indians by claiming third place in the Palmyra Tournament. In the first quarter, Canton’s Josh Ellison came to prove the Tigers were not to be taken lightly, as he hit a pair of threes, but the Indians also can shoot from the outside, as they hit three, by. Plenge, Allen and Vineyard, and Clark came out on top at 17-16.
In the second quarter, Canton still from outside, hit four more threes, Michael Brennan added 6 for the Indians, but Canton came away 18-12, and took the halftime lead at 34-29.
The Indians came out the second half with a new meaning on defense, as they held Canton to 8 points, while putting up 16 with five Indians scoring.
The final quarter found Canton not doing much better. They only put up 11 points. The Indians took advantage of the Tiger’s fouls, as they hit 11 of 15 free throws in the fourth, and Canton hit only 3 of 13, for the game. The Indians came away with third place, with a 62-53 win.
The Indians were led in scoring by Michael Brennan with 19 points, followed by Bryan Plenge, with 12, Ethan Allen and Colt Sommers both had foul trouble added 9 each. Scott McAfee had a good game with 8, and Javis Vineyard added 5.