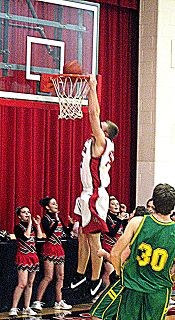 Knox County (10-6, 4-1 in the conference) jumped out to a 29-11 first quarter lead in January 22, Tri-Rivers Conference boys’ action and took a 76-35 win from Milan. Dennis Dent recently broke the Knox County High School career rebound record, and is currently over 600 rebounds for his career.
Kurt Strange was the previous KCHS boys’ career record holder with 577 career caroms. Mr. Strange presented Dennis Dent with a trophy basketball during a brief ceremony during the home varsity doubleheader.
The Eagles out scored the Wildcats (4-11, 0-2) by a15-11 margin in the second quarter and held a 44-22 halftime lead. The Eagles held Milan under ten points defensively in each of the final two quarters of play.
Twelve of the 13 Knox County players dressed for the contest scored. Knox County outscored Milan 32-13 in the second half for the 76-35 win. "Overall it was a good group effort," said KCHS head coach Jesse Crawford. "Dennis Dent had a real nice dunk in the third quarter."
"It was his first career dunk. Dennis has broken the school rebound record as a junior in high school. He is probably two or three weeks from the 1000 point plateau. He is well on his way to being one of the best post players to come through these hallways at Knox County," said Coach Crawford.
"Zach Parrish had a good game for us," said Crawford. "He scored 11 points and had five assists mostly in the first half. This was a good win for our program. We have been up and down this season. This was a good chance to get a lot of guys in the game and rest our legs."
Dennis Dent scored 19 points and pulled down seven KCHS rebounds. Daniel McMahon tossed in 19 points to go along with five steals. Dent and McMahon shared game scoring honors. Zach Parrish was in double figures with 11 points. Parrish dished out five assists and had five steals.
Knox County stole the basketball 22 times on the night. The Eagles dished out 19 team assists and only turned the ball over six times. Knox County held an unofficial 36-14 advantage in rebounds.
Bryce Richardson led the Wildcats with eight points. Milan was 6-11 at the free throw line. Knox County sank six of ten free throw attempts. The Eagles had 26 field goals to ten for Milan and a 6-3 made home run ball advantage at the three point arc.
Cory Shultz sank a pair of threes’ for six points on the night. Shane Clouse and John Greenley scored four points each. Cody Morgenstern scored three KCHS points. Keenan Gillaspy, Brett Wilkerson, Mitchell Penn, Lucus Hudson and Ethan Hustead added two Knox County points each.