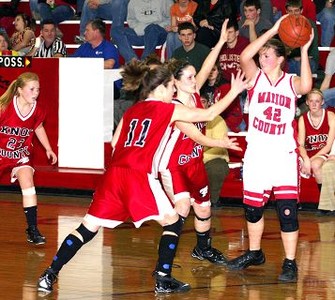 Knox County proved their North Shelby Tournament victory over Marion County was no fluke with a 46-32 win at Philadelphia. The Lady Eagles evened their season record at 8-8 with the defensive pressure fueled road win.
The Lady Eagles came out of the huddle breathing fire. Knox County scored the contest’s first 11 points. Lorrie Peters capped the opening spurt with an acrobatic finish of a baseline drive. Knox County dominated the first four minutes of the game on both ends of the court.
Ranay Sharpe sank two Marion County free throws for the home team’s first two points with 3:35 showing on the first quarter clock. Amanda Woods answered a Kelsey Tuley bucket with a put back field goal at the 1:48 mark of the first quarter. Knox County held a 13-4 lead.
Marion County has athletes and are very difficult to beat on their home court. Both sides got their share of offensive rebounds in the first half. Knox County turned the basketball over too many times late in the first period.
The Lady Mustangs scored the last four points of the first quarter for a 13-8 KCHS lead after one period. Knox County came out of the gate and scored seven of the first eight second period points for a 20-9 lead at the 4:19 mark of the second quarter.
Knox County pulled off two sharp looking plays during their 7-1 run. Becca Mallett cashed in a well executed interior pass play opening the burst. Amber Ausmus sliced the net with a three ball. Tessa Ramer took a Stacey Leckbee feed to the house capping the run.
The Lady Eagles outscored Marion County 9-3 in the second quarter and took a 24-11 lead to the locker room. Knox County wound up pressuring the Lady Mustangs into 30 turnovers. The Lady Eagles took advantage of the home team’s ball handling problems with solid shot finishes.
Knox County displayed good floor play during the third quarter. The Lady Eagles did a much better job on the glass. The basketball wound up in Knox County hands more times than not.
The Lady Eagles made Marion County (5-9) look far less athletically gifted than they are in reality.  Becca Mallett sank a buzzer beater, lifting Knox County to a 37-17 lead after three periods of play. The Lady Eagles seemed to smell blood in the water.
Knox County came out and pressured hard in the half court. The home team had a tough time executing their offense all night long. Caley Palmer completed a three point play for a 42-23 KCHS lead with 2:10 to play in the game. Both sides fought and scratched until the final buzzer in a contact filled contest.
Marion County finished the game on a 9-3 run. Ranay Sharpe ripped a three pointer near the buzzer for the 46-32 final score. Knox County converted four of six from the free throw line. Marion County went a good 5-8 from the charity stripe.
Ranay Sharpe led the Lady Mustangs with seven points. Tessa Ramer and Lorrie Peters scored a game high 13 points each. Amanda Woods scored eight KCHS points.
Becca Mallett scored four points. Caley Palmer and Amber Ausmus finished with three points each. Stacey Leckbee added two Knox County points.
Brashear travels to Knox County on Monday, January 28. Both teams enter the non-conference contest with 8-8 records. Knox County has now won four of their last five games. Knox County and Brashear will play their next game after their Monday meeting in the Brashear Tournament.
"Our game plan going in was to get after it for 32 minutes," related Knox County coach John Weaver. "I was a little unhappy with how we finished the game, but we played strong for three and a half quarters. Any time you can put ball pressure for 90 feet, good things are going to happen on both ends of the floor."
"We take a lot of pride in our defense," said Coach Weaver. "Steals on the defensive end help on the offensive end. If we can continue doing this, we can play with any team in our area. We talked about boxing out (on rebounds) and taking advantage of our size in the second half. "
"Defensive intensity," said Weaver. "That’s why we are where we are at right now."