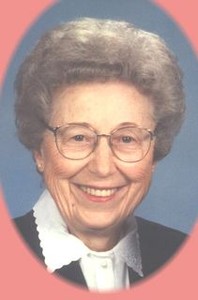 Nursing Home in Kahoka where she had made her residence since October of 2001.

She and Walter Ehrhart were married in Linneus, MO, in 1948. He preceded her

in death on February 24, 1980. She and her childhood friend, John W. Ascott, had both lost their spouses, and were married on June 18, 1987. They spent the next 14 years together loving and caring for each other until his death on December 7, 2002.

Survivors include a step-son, John W. Ascott and his wife, Suzanne, of Anchorage,

Alaska; a brother-in-law, Robert Ascott and his wife, Ruth, of Aurora, IL; a niece, Gladys

Wallingford and her husband, Robert, of Farmington, IA; a special cousin, Vickie Randolph and her husband, David, of Bonaparte, IA; great nieces and nephews and their families; cousins; and many dear and special friends.

She was preceded in death by her parents; her husbands; a brother in infancy; a

Agnes was a graduate of Revere High School and lived most of her life in the Revere neighborhood. In earlier years she worked for Doc McConnell at the drug store and later at the

Revere Bank. For the last 17 years of her employment, she was a secretary at the Revere School and loved the relationships she formed and kept for the rest of her life with many of the students.

She was a member of the Peaksville Christian Church and enjoyed the fellowship with friends and the activities at the Revere Community Center and the Clark Co. Senior Center.

She was compassionate, gentle, fun loving, and always encouraging to friends and family.

Funeral services were held Saturday, January 26, 2008, at 10 a.m. at Wilson Funeral Home in Kahoka with Pastor Shawn McAfee officiating. Special music "Till the Storm Passes Over" was provided by John Spray.

Visitation was at Wilson Funeral Home between the hours of 9 and 5 on Friday with family receiving friends from 9 a.m. until time of services on Saturday.

Memorials were suggested to the Revere Community Center.