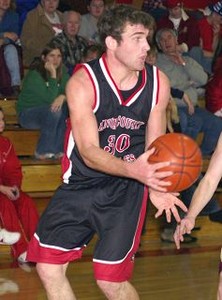 Knox County (11-7) cleaned the glass for a 32-20 rebound advantage along with a 51% shooting night from the field on the way to a 73-45 victory over Brashear. The home standing Eagles sprang to a 19-9 lead and were never headed.
Dennis Dent scored a game high 20 Knox County points to go with nine rebounds. Cory Shultz tossed in 17 KCHS points. Daniel McMahon was the third Knox County player in double figures with 14 points. Zach Parrish led the Eagles with five assists and three steals. Parrish scored nine KCHS points.
Trae Treasure paced the Tigers (11-6) with 14 points and six rebounds. Kale Watson scored 12 Brashear points. Matt Thomas got his offensive game untracked. Thomas was the third Tiger reaching the double figure scoring mark with ten points.
Knox County ball pressure would not allow the at times high octane Tiger offense to get rolling. Brashear scored the final basket of the first quarter and trailed 19-11 after eight minutes of basketball.
Knox County hammered a solid Class 1 team to the tune of a 19-8 second quarter run to a 38-19 intermission edge. The Eagles got their inside to outside offense going in the third quarter.
The Eagles outscored Brashear 23-10 in the third quarter for a 61-29 lead going into the fourth quarter. The Tigers hit from the outside and outscored Knox County 16-12 in the fourth period. Seven different Brashear players and nine Eagles dented the scoring column.
Knox County sank ten of 15 free throws as a team. The Tigers scored on three of their six scoring attempts from the charity stripe. "They hit their first shot, and from there it was all down hill for us," commented Tiger coach Sara Williams.
"We kind of had it in our head that it was over," said Williams. "We didn’t battle back very well. We made a run at the end of the first quarter. I thought we were going to get things under control. It just dominoed after that. We could never get into the flow of our game. They just took us out of that."
Both sides took care of the basketball. Knox County was charged with ten turnovers while Brashear had only seven turnovers. Knox County recorded 11 steals to seven for the Tigers.  Knox County kept the Tigers away from the lane most of the contest. The Eagles commanded an 18-1 lead in team assists.
Justin Hazen, Matt Thomas and Kale Watson had two Brashear steals each. "Brashear has good talent. They have put together some good wins on the season," said Knox County coach Jesse Crawford.
"We knew we would have to be prepared," said Coach Crawford. "We got off to a good start and scored 19 points in the first quarter. It makes it pretty dangerous when your guards hit from the outside. For the first time this year, Daniel McMahon, Cory Shultz and Zach Parrish scored at or near double figures in the same game."
"That opened things up for Dennis Dent inside," said Crawford. "Senior Ethan Hustead had a nice game inside. He scored five points off the bench and came up with some good plays. It was an overall good team effort. "
"Brashear just didn’t hit their shots, and we took advantage of that early," said Jesse Crawford. "We know they are a good team. They were reeling. They will be a different team if we see them in the Brashear Tournament next week.
Knox County is seeded first in the Brashear Tournament, scheduled for February 4-9. Brashear goes in as the second boys’ seed followed by Marion County, Macon County (13-3) is the fourth seed followed by an improving North Shelby boys’ club.
Kiley Watson scored four Brashear points. Justin Hazen and David Anderson tallied two each. Anthony Ambrosia added one Brashear point.
Ethan Hustead scored five points and pulled down three Knox County rebounds. Brett Wilkerson canned a three ball in the fourth quarter and finished with three Eagle points. Shane Clouse finished with two points and four boards. Mitchel Penn added two Knox County points.