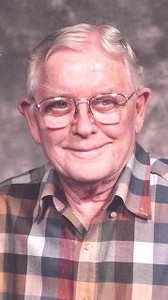 On May 31, 1956, in Alexus, Illinois he was united in marriage to Florence Waldmen who preceded him in death on September 7, 1977.

Surviving are two sisters, Carmelita Slocum and Bernadine Barker both of Kirksville, Missouri, and several nieces, nephews and cousins.

Bob graduated from Kirksville High School with the class of 1941.  After high school he worked for the Journal Printing Company as a typesetter.  He moved to Rock Island, Illinois where he was employed for the Argus Newspaper for many years.

He has lived in Kirksville for the past several years.

Bob enjoyed fishing with many nieces and nephews over the years and telling big fish tales.  He also enjoyed dancing to the dig band sounds.

A Mass of Christian Burial was held at 10 a.m. Saturday, February 2, 2008, at the Mary Immaculate Catholic Church in Kirksville, Missouri.   Father Pat Shortt officiated the services.

Expressions of sympathy in memory of Robert L. (Bob) Moore may be made to the Catholic Newman Center at Truman State University.  Memorials may be left at or mailed to Davis-Playle-Hudson-Rimer Funeral Home, 2100 East Shepherd Avenue, Kirksville, Missouri 63501.