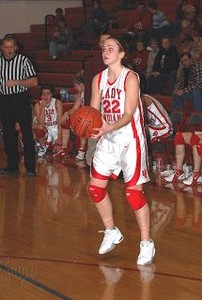 By Herb Butler
The Clark County Lady Indians hosted the Scotland County Lady Tigers on Thursday evening January 31 in a Conference game. Due to illness, the Lady Indians started a different lineup, and they held their own.
In the first quarter Kassidy Shuman and Cady Flood led Clark County with three points each, and the Lady Indians took the quarter, 10-7.
The second quarter saw the Lady Tigers start to make a game of it, as they fell by one point in the quarter, 13-12, and Clark led 23-19 at halftime, behind Shuman’s eight points.
The third quarter saw Amanda Winters take charge, as she added 8 third quarter points, and again Clark outscored the Lady Tigers 11-8, to hold the lead after three quarters, 34-27.
Then in the final quarter Clark County was still shifting players due to sickness, and trying to keep his players to finish. Winters added four, Shuman added three along with a three from Brittany Logsdon, and a two from Daryle Goldie. But the Lady Tigers were trying for a big upset, but it fell short, as the Lady Indians remained undefeated in Conference play at 5-0, by defeating Scotland County, 46-42.
The Lady Indians were led by Amanda Winters with 14, followed by Kassidy Shuman with 12, Brittany Logsdon had five, Daryle Goldie added four, Cady Flood had three, and Brooke Wheeler, Britni Bertelli and Megan Wilson had two each.