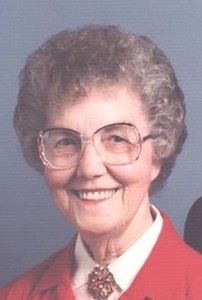 Wilma was born April 17, 1918 in St. Francisville, Missouri, the daughter of William S. "Willie" and Hattie B. (Parsons) Toops. She graduated from Wayland High School in Wayland, IA and attended God’s Bible School, John Fletcher College and the University of Northern Iowa.

Wilma taught school in Truro and Ollie, Iowa; Sacred Heart School in Waterloo and Don Bosco School in Gilbertville, retiring in 1985. She loved her family and enjoyed spending time with her grandchildren. Wilma also enjoyed crossword puzzles, playing "Boggle" and watching "Wheel of Fortune" and "Jeopardy".

She was preceded in death by her parents; her husband; three brothers, her twin brother William, Warren and Howard Toops; a sister, Rovilla Caulkins and a son-in-law, Mark Larson.

Funeral Services will be held at 10:00 A.M. Thursday, January 31, 2008 at Lighthouse Fellowship Church in Waterloo with burial in the Garden of Memories Cemetery. Friends may call from 6:00-9:00 P.M. Wednesday at the Kearns, Huisman-Schumacher Chapel on Kimball and after 9:00 A.M. Thursday at the church.

Memorials may be directed to the family. Condolences may be left at www.kearnsfuneralservice.com. 319-233-3146