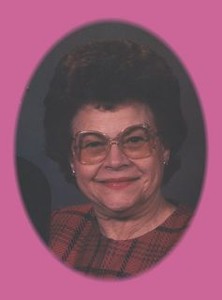 She was born October 3, 1924 at Nauvoo, IL, one of eight children of Vernon F. and Anna R. Ourth Schneider.

She married Raymond R. Grisham on March 14, 1941 and they lived most of their lives together in Hancock County, IL. He preceded her in death on October 9, 1988. On November 29, 1991, she married Donald T. Worrell and she moved to his farm in Clark County until her health started failing and they bought a home in Kahoka.

Survivors include her husband, Donald Worrell, of Kahoka; a son, Don Grisham of Keokuk; two daughters, Norma Gibson and Sue Osterloh, both of Hamilton; two step-daughters and their husbands, Janet and Lary Fountain of Kahoka and LaDonna and John Parker of Luray; a daughter-in-law, Carolle Grisham of Keokuk; a sister, Francine Kite of Croton, IA; sisters-in-law and brother-in-law: Shirley Breakbill of Montrose, Betty and Glenn Oloman of Burlington, and Helen Martin of Kahoka; seven grandchildren: Tony and Randy Gibson both of Springfield, MO, Butchie and Angie Wrieden of Muscatine, Corina and Alan Kendal of Oskaloosa, Marlene and Richard Turchin of Minnesota, Tracy and Chrissy Grisham of Keokuk and Corey and Nancy Grisham also of Keokuk; five step-grandchildren: Tami Christian of Havelock, NC, Sheri Ankeney of Des Moines, Shaun and P. J. Parker of Hannibal, Marcus Parker of Plano, TX, and, Clayton Parker of Kirksville; also several great and great-great grandchildren; as well as nieces, nephews, and other relatives.

Fern’s first job was with Swift and Co. She retired from Sheller Globe and later worked at Foil Graphics, all in Keokuk. She was a member of Steelworkers #444 at Keokuk and former member of the Moose at Fort Madison. She and Don were active members of the Kahoka United Methodist Church.

Fern loved to be busy. She loved to dance and loved to care for her garden and flowers. Weeds were her enemy and didn’t stand a chance with her around. Dearest to her heart was her family. Family was important to her and seeing that they were all cared for. They always came first and the word "step" wasn’t in her vocabulary. She was blessed with loving family and two husbands she loved dearly.

Funeral services were Friday, February 8, 2008, at 1 p.m. at Wilson Funeral Home in Kahoka with Lee Ourth officiating. Mrs. Ida Ross was pianist with special music "In the Garden".

Burial was in Moss Ridge Cemetery at Carthage, IL.

Memorials were suggested to the Kahoka United Methodist Church.