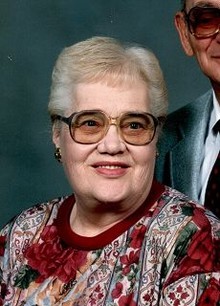 Marjorie Anita Hatfield, 85, passed away quietly at her home in Memphis, in her sleep, on February 6, 2008.

She was born the second child of Glen Allen and Helen M. (Kutzner) Chambers, near Gorin, Missouri on November 20, 1922.

Marjorie attended the Cedar Grove School near her home for eight years, walking to and from school, with her sisters and neighbor children.  She graduated from Gorin High School in 1941.

She developed tuberculosis at this time and spent a year in a tuberculosis sanatorium at Mount Vernon, Missouri, recovering completely.

She was a member of the First Baptist Church of Memphis at her time of death. She accepted Christ as her savior early in life and loved her Lord.

Marjorie worked as a telephone operator and worked in administrative offices of hospitals in Kansas and Missouri. Her hobbies were crocheting, growing flowers, her family and her home. Marjorie served as Sunday School teacher and pianist; she led G.A.’s and taught Training union.

Preceding her in death were parents and many relatives and friends.

She is survived by her husband, Lemuel; two sons, Eugene and wife Kimberly Hatfield of Springfield and Alan and wife Sandy Hatfield of Chanute,  KS; her sisters, Verlee and husband Harley Dauma and Virginia and husband Ivan Woods, all of Memphis, and Glenna and husband John Tolliver of St. Peters, MO; two grandsons, Chris and Curt Hatfield; one granddaughter, Terry and husband Terry Nix; and seven great grandchildren.

Memorials in memory of Mrs. Hatfield are suggested to the First Baptist Church and can be left at or mailed to the Gerth Funeral Service, 115 S. Main, Memphis, MO 63555.

Condolences may be sent to Mrs. Hatfield’s family via email at gerths@gerths.com.

Arrangements are under the direction of the Gerth Funeral Service from their Memphis chapel.