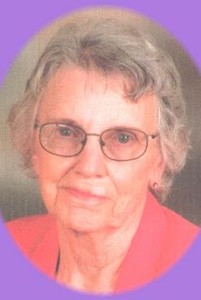 Fayla Overhulser Thomas, age 83, of Kahoka, MO, went to be with her Lord and Saviour on Saturday, February 9, 2008, while a resident of the Clark Co. Nursing Home in Kahoka.

She was born December 5, 1924, a daughter of Bryan and Carrie Kirner Overhulser.

She was raised in Luray, MO, married Vern Thomas in 1945, and moved to Illinois for 15 years before embarking on a 26-year tour of the U.S. with Vern’s work on major constructions jobs. During that period, they lived in nine different states and visited most of the country. They retired in Branson, MO, for 12 years before Fayla returned to Kahoka after becoming a widow.

She was preceded in death by her husband, Vern "Spud" Thomas; her daughter,Velva Hardesty of Norfolk, VA; and her granddaughter, Lori Frazier Gregory of Kahoka.

Fayla had many interests including plants, visiting yard sales, travel, many forms of arts and crafts and playing card games. Throughout her many years of travel with Spud’s occupation, she enjoyed serving others through volunteer work, being a homemaker, and the different careers she held while performing various jobs. Her home was always open to friends and family. Her friendship and kindness will be dearly missed by all who knew her including her dog, Lincoln.

Funeral services were held Wednesday, February 13, 2008, at 10:30 a.m. at the Kahoka Christian Church with Rev. Dick Clifford officiating. Mrs. Bonnie Vineyard was pianist. Special music "I Can Only Imagine" and "Precious Lord, Take My Hand" was provided by Andrew Bell.

Burial followed in the Combs Cemetery at Luray.

Visitation was held at Wilson Funeral Home after noon on Tuesday with family receiving friends from 6-8 p.m. Memorials were suggested to the Combs Cemetery.