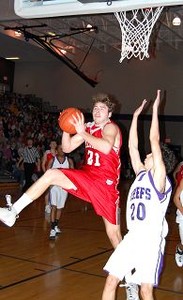 The Clark County Indians went into Iowa to take on the Keokuk Chiefs on Saturday afternoon, February 9. The Chiefs started off by outscoring the Indians 11-7.
In the second quarter the Indians turned the tables on the Chiefs as Colt Sommers added eight points, Lynn Williams chipped in six and the Indians outscored the Chiefs 18-12, to lead at halftime 25-23.
The Indians maintained their lead through the third quarter’s 13-10 scoring behind Vineyard’s five points, and Clark County led 38-33.
In the fourth and final quarter held all the excitement, both teams played well through the quarter, until the end. The Indians held the lead 52-50, with 6 seconds left to play, Keokuk threw the pass to Trevor Galbirth who hit the basket to send the game into overtime.
During the overtime the Indians put up eight points.  In the final play, the Chiefs had the ball out of bounds by the scorers table with 3 seconds left, the game was tied at 60-60.  Then the heartbreaker happened, as they hit the final shot to down the Indians 62-60.
The Indians were lead by Colt Sommers with 15 points, followed by Michael Brennan with 11, Scott McAfee and Lynn Williams both had nine, Javis Vineyard added eight, Ethan Allen had four.