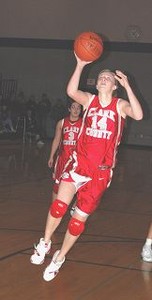 The Clark County Lady Indians crossed the river on Saturday afternoon, February 9 for a makeup game with the Lady Chiefs.
The game was played at the Middle School. The Lady Indians took the opening quarter 12-4, but the Lady Chiefs came back in the second quarter by outscoring Clark County 15-12, but the Lady Indians led at halftime, 24-19 behind Kassidy Shuman’s nine points.
The third quarter saw Shuman continue her destruction of Keokuk, as she pumped in eight points, Daryle Goldie added six, but Keokuk took the quarter 20-16, but the Indians led after 3 quarters, 40-39.
The Lady Chiefs made a game of it, but Goldie, Logsdon and Shuman were not going to let this happen. Shuman fouled out, but the Lady Indians had already put the hurt on Keokuk, as they took the fourth quarter 19-10 to walk away with a 59-49 victory.  The Lady Indians are not 14-6 overall, and 6-0 in the TRC..
Leading the way for the Lady Indians was Kassidy Shuman with a game and season high of 26 points, followed by Brittany Logsdon with 11, Daryle Goldie added 10, Amanda Winters had six, Megan Wilson had four and Brooke Wheeler added two.
The Lady Indians will go for the Tri-rivers conference Championship Tuesday night at home against the North Shelby Lady Raiders.