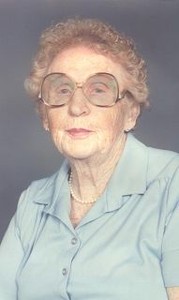 Mary Lou was born on February 20, 1909, in Blandsville, Illinois, the daughter of William Joseph and Mary Ellen Dukes Jordon.

She was born and raised in McDonald County, Illinois and met her future husband in Quincy, Illinois and on May 5, 1927 Mary Lou married Lawrence E. Goodson, in Jacksonville, Illinois.

After their marriage they moved to St. Louis, Missouri before returning to northeast Missouri, in 1932 to make their home northeast of Knox City, Missouri where they farmed and raised a family. Mom, Mother, Grandma Goody was the happiest when all of her family was around her.

The family is honoring Mary Lou’s wishes with cremation and a private family service will be held at a later date.

An expression of sympathy in memory of Mary Lou Goodson may be left to the Knox City Christian Church or the Knox City Fire Department. A memorial may be left at or mailed to the Doss Funeral Home 208 N. 4th Street, Edina, Missouri 63537.