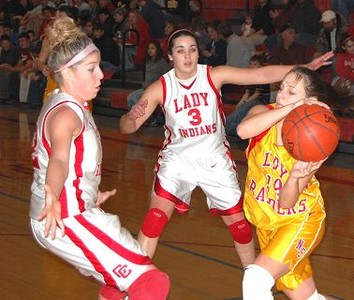 The Clark County Lady Indians brought their 6-0 Conference record into the gym against the ladies from North Shelby, who were sporting a 1-3 conference record. The Lady Indians came out and said there will be no upset tonight. The six seniors playing their last Tri Rivers Conference game were not going to let that happen.
In the opening quarter they showed that the young Lady Raiders were no match, as they scored 17 first quarter points behind Amanda Winters with six, Kassidy Shuman had four, Daryle Goldie hit a three and Brittany Logsdon added four, and it was 17-1.
Goldie came out in the second quarter and added seven more points, Winters added another two, and the Lady Indians led at halftime, 31-15.
The third quarter left no question in anybody’s mind, as they put up a 24 point quarter, behind Winter’s 10 points, while Shuman added five, and after three the Lady Indians led, 53-17, and went on to claim the conference crown, with a 60-30 victory.
The Lady Indians were led by Amanda Winters with 20 points, followed by Daryle Goldie with 10 points, Kassidy Shuman and Megan Wilson each had seven, Brenna Buford added five, Brittany Logsdon and Brooke Wheeler both scored four, Britni Bertelli added two and Cady Flood added a free throw.
The Lady Indians have not lost a Conference game since the 2002-03 season, and that was to Putnam County. They have won 8 of the last 9 Championships and 7 have been undefeated. "Great Streak".