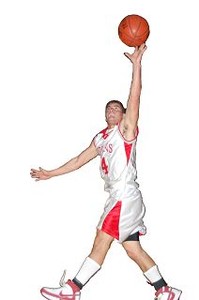 The Clark County Indians brought a 6-0 undefeated Conference record into Tuesday night’s contest with the North Shelby Raiders. The Raiders came to play, and surprised the Indians.
In the opening quarter Javis Vineyard had five points and Michael Brennan added four, but the Raiders led 13-11 after one quarter.
The second quarter saw the Raiders with upset in their eyes as they hit their fifth  three-pointer in the first half, and outscored the Indians14-10 to take a lead into halftime, 27-21.
The Indians came out in the third quarter and in the first minute and fifty seconds, the Indians went on a 10 point run to recapture the game’s momentum
Ethan Allen hit seven points, Vineyard added another six, Brennan and Sommers added four each, and Plenge added a trey, and put the hurt on the Raiders, 24-3, and took a 45-30 lead into the final quarter, putting an end to the upset-minded in the Raiders.
The Indians lost the fourth quarter 11-9, Vineyard added another five, and the Indians won 54-41 to become  the Tri Rivers Conference kings.
The Indians were led in scoring by Javis Vineyard with a game and season high with 18 points, followed by Michael Brennan with 14, Ethan Allen added nine points, Colt Sommers, in foul trouble all night, and playing his last conference game, pumped in eight and Bryan Plenge added five.
The Indians are now 16-6 and finish 7-0 in the Tri-rivers conference. They close out the regular season with games at Canton on Friday, February 15, and finish at home on February 19 against Highland.