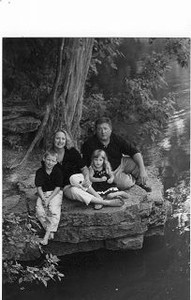 Kevin was born on July 6, 1969 in Fort Madison, IA, the son of James and Janet Wallingford Elliott. Tasha was born on June 28, 1971 in Freeport, IL, a daughter of Wayne E. And Carol A. Heeren Byers.

Kevin graduated from Clark Count R-1 High School in 1987 in Kahoka, MO and graduated from Lincoln Tech in Des Moines, IA in 1988. Kevin worked as a Resource Conservation Technician, SWCD from 1994 – 1998 in Clark County, MO, from 1998-1999 in Hancock County, IL and from 1999-2006 in Henderson County. Currently, Kevin worked at Tri-State Collision in Hamilton, IL. Kevin was a member of Anson Community Church.

Tasha graduated from Highland Community College and Western Illinois University in Macomb, IL. She taught 5th grade at Hamilton Elementary School for several years before accepting the position of principal. Kevin raced B-modified stock cars and was building a sprint car. Kevin loved hunting, fishing, computers, watching movies, playing X-box, watching NASCAR and cooking for friends and family. Kevin, Tasha and the children spent time together 4-Wheel Riding and working on Kevin’s cars. Tasha also enjoyed spending time with the many friends she had made through the Hamilton school system. Tasha and Kevin had adventurous spirits, a zest for life and were always ready to meet new friends and face new challenges.

Wyatt loved fishing, hunting, 4-Wheel Riding and telling stories. He loved spending time with Base and Logan, sharing advice on world topics and ganging up on Brix, with Bryn being his first love. He enjoyed vacationing with his entire family in the Wisconsin Dells, roaring down the water slides and basking in the sun. Wyatt loved going to Grandpa Jim’s farm and helping him work calves and ride the John Deere Antique Tractors. Madison loved any form of art – cutting, glueing, painting and displaying her art work. She loved shopping, lunching and playing with make-up. She loved to read, write and tell stories. She was very social, loved animals and enjoyed investigating and inspecting the world around her. She was a member of Brownies and a role model for Erika, while quizzing Amanda about nursing. Madison also loved sleep-overs with Sabrina and Vanessa, her cousins, where she loved seeing her horse and foal. The family loved life in general, loved their friends and family and lived life to the fullest.