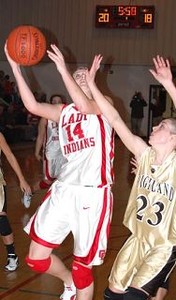 The Clark County Lady Indians closed out their regular season on Tuesday night, hosting the Highland Lady Cougars on Senior Night. The Lady Indians have six seniors on the squad:  Kassidy Shuman, Amanda Winters, Daryle Goldie, Brittany Logsdon, Brenna Buford and Megan Wilson.
The Lady Cougars came to spoil the night for the seniors, and outplayed the Lady Indians to take a 11-8 lead after the first quarter.
In the second, Goldie, Shuman and Logsdon each nailed three-points on their way to a 10-7 quarter and an 18-18 halftime tie.
The Lady Indians stepped up the defensive pressure in the third, allowing Highland only two point, as Goldie and Winters each added four.  After three quarters, Clark County led 28-20.
Highland’s Abigail Gaus didn’t give up on the upset bid, as she led the Lady Cougars with 11 fourth-quarter points, but Highland fell short as the Indians posted a 42-37 win.
Goldie and Shuman led the scoring with 14 each.  Winters added nine, Logsdon had three and Wilson had two.
It has been a pleasure watching these six senior athletes play the game of basketball over their four years, and we wish all of them good luck.