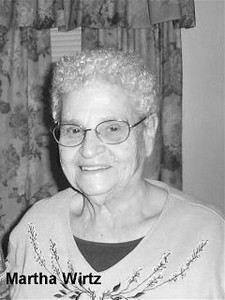 She was born on June 11, 1928 in Huntsville Township, Schuyler County, IL, the daughter of Louis S. and Gladys M. Rust Lambert.  She married Joe Groseclose on July 31, 1949 and to this union was born five children.  He preceded her in death.  On April 12, 2003, Martha was united in marriage to Arthur Wirtz in Keokuk, IA.  He survives.

She was also preceded in death by one son, Thomas Groseclose, two brothers, Philip Lambert and Clarence Lambert, and one sister, Carollann Lambert.

She owned and operated the Southside Café in Lancaster, MO for several years and also worked at other restaurants in the Lancaster area.  She moved to Baring, MO in 1996 and cooked at the Oliver Café until her retirement in 2003.

Funeral services were held at 2 p.m. Wednesday at the Vigen Memorial Home in Keokuk, IA with Reverend John Tyler officiating.  Burial was in the Hickory Grove Cemetery in rural Keokuk, IA.

Memorials may be made to the St. Paul United Church of Christ or the Hickory Grove Cemetery.