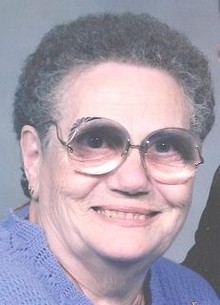 Mary Evelyn Richardson, 79, of Kirksville, Missouri died at the Kirksville Manor Care under the care of Hospice in Kirksville, MO.

The daughter of James and Leola (Plunkett) McSorley, Mary was born on October 2, 1928 and grew up southwest of Newark, Missouri where she received her education.

On February 28, 1947, Mary married Ralph W. Richardson. The couple made their home in the Baring and Greensburg area where Mary was a telephone operator. Later they moved north of Edina where they farmed and Mary worked for DeRosear Flowers for twenty-­four years. After retiring and moving north of Hurdland, Mary operated a greenhouse and raised quail, pheasants, and turkey. Mary was well known in Adair and Knox County for making beautiful quilts for others and her family. In 1992, they moved to the Brashear Senior Housing where Mary served as President of the Senior Housing for several years. Mary became a member of the Brashear Community Bible Church and was very active in the church. In recent years Mary belonged to the Faith Untied Methodist Church

Mary was preceded in death by her husband, Ralph and infant daughter, Kathryn, a great grandson, Nathan Richardson, her parents, and two brothers, JC and Larry McSorley.

Flowers were a big part of Mary’s life and she will be remembered for her beautiful work. Her children, grandchildren and great grandchildren will always remember the pieces of love Mary put in each quilt they received.

A funeral service was held on Friday (February 22, 2008) at Davis-Playle-Hudson-Rimer Funeral Home with Chaplain Carrol Davenport officiating. Burial was in the Greensburg Cemetery in Greensburg, MO.