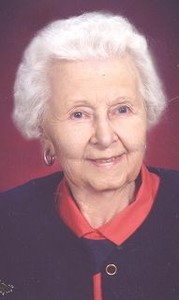 She was born on December 28, 1909, at Mystic, Iowa, the daughter of Alexandria and Alicia Truskoski Mendina.

On September 6, 1925, she was united in marriage to Arthur Joseph Welch in the St. Aloysius Catholic Church at Baring, Missouri and he preceded her in death on June 1, 1973.

Ann was also preceded in death by her parents, two brothers, Tony and William Mendina and two sisters, Helen Jackson and Sophia Wolever.

Mrs. Welch was raised in Mystic, Iowa, where she graduated from high school. She and her husband lived in LaBelle, Missouri and later moved to Edina in 1940 to make their home.

She also was employed part time at the Missouri Power & Light company office in Edina for several years and served as a board member of the Knox County Senior Housing for five years.

Music will be provided by Nancy Reardon, organist, and Anne Gramling soloist.

Visitation will be Wednesday, March 5, 2008, after 4 p.m. with the family receiving friends from 6 p.m. to 8 p.m. in the Hudson-Rimer Funeral Home in Edina, Missouri.

A Prayer Service will be held at 7 p.m. Wednesday in the Chapel.

Expressions of sympathy in memory of Ann Alicia Welch may be made to the St. Joseph Catholic Church. Memorials may be left at or mailed to Hudson-Rimer Funeral Home, P.O. Box 1, Edina, Missouri, 63537. hrimer@marktwain.net