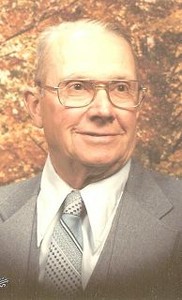 The son of Loyd and Ruth Barber St. Clair, he was born on June 28, 1916 in Clark County, MO. He was united in marriage to Bessie Mae Sharts on August 8, 1942 in Handsboro, Mississippi. Lee was a member of the First Baptist Church in Canton, where he had served as Deacon and a Sunday school teacher. He owned and operated a dragline service for many years. After retiring he was an avid gardener and had a greenhouse.

He was preceded in death by his parents, a son, Daniel St. Clair, two sisters, Rachel Louise St. Clair, and Mrs. Isabel Clark, and one brother, Ralph St. Clair.

Funeral services were held Sunday, March 2, 2008 at 2 p.m. at Arnold’s Funeral Home in Canton, MO., with Reverend Dan Deatrick officiating, and burial in the Wyaconda Cemetery in Wyaconda, MO.

Visitation was held Saturday evening from 6 until 8 p.m. at Arnold’s Funeral Home.

Memorials may be made to the Lewis County Nursing Home, Butterfield Youth Services, or Donors Choice.

Music was provided by organist, Mrs. Shirley Hinkle, and vocalist was Bill Dorris.

Online condolences may be left at www.arnoldsfuneralhome.net.