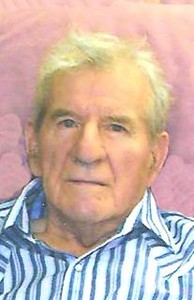 He was born August 26, 1920, in Kenwood, Missouri the son of Edwin Penman (Pen) and Callie Louise Pruett Mayer.

On April 5, 1941, in Brashear, Missouri he was united in marriage to Ellen Irene Binkley and she preceded him in death on September 13, 1971.  To this union three children were born.

On March 14, 1980 at Atlanta, Missouri he was united in marriage to Anna Margaret Ward Couch.

Mr. Mayer attended the Liberty Grove School and was a 1938 graduate of the Hurdland High School, Hurdland, Missouri.  He served his country in the United States Army from 1945 to 1946.  During his military service he received the Asiatic Pacific Theater Ribbon, Victory Medal and the Army of Occupation Medal Japan.

Mr. Mayer was employed with the Civilian Conservation Corps in Canton, Missouri in 1939 and was a section worker an machine operator in Baring, Missouri for the Atchison, Topeka and Santa Fe Railroad which took him from Streator, Illinois to Marceline, Missouri where he made many good friends during his forty years of service.

Funeral services were held 10 a.m. Monday, March 3, 2008, at the Hudson-Rimer Funeral Home in Edina, Missouri with Dennis Mayer officiating the services.  Burial was in the St. Joseph Catholic Cemetery in Edina, Missouri.

Music was provided by Mike and Pam Blaine.

Expressions of sympathy in memory of Lyle Edwin Mayer may be made to the Alzheimer’s Association or the Twin Pines Adult Care Center Activity Fund.  Memorials may be left at or mailed to Hudson-Rimer funeral Home, P.O. Box 1, Edina, Missouri, 63537.