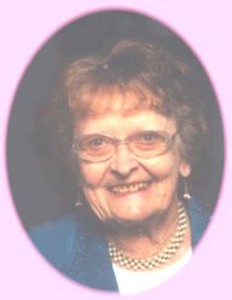 She was born May 13, 1926, at her parents’ home northwest of Luray, MO, a daughter of Hollis S. and Essie Kerner Leeper.

She was united in marriage to Ross Dochterman on October 14, 1945, at the home of her parents near Lewistown, MO. To this union were born two sons, Keith Leon and David Lynn. Ross preceded her in death less than one month from their 60th wedding anniversary on September 27, 2005. On May 13, 2007, she was united in marriage to Kenneth Ferguson, a friend since the 8th grade, at the Southern Baptist Fellowship Church in Wayland. He survives.

She was preceded in death by her parents; her husband, Ross; a sister, Neva Ann Klopfer of Gorin and a brother, Richard S. Leeper of Keokuk.

Dorothy graduated from Luray High School and attended college in Kansas City. She had worked at Dryden’s and the Iowa Ordinance Plant and several other places in Lee County. She was a former licensed realtor for Town and Country Realty in Kahoka. Her family moved from the Luray vicinity to the Wayland area in 1959 where she joined Ross in farming in "the bottoms" until retiring and moving to Kahoka in 1985.

Dorothy was a faithful member of the Southern Baptist Fellowship Church of Wayland, MO. Being converted at the age of 12 years, she loved her church and its members and wanted everyone to know her Jesus. She faithfully tried to visit the lost and church members every Thursday afternoon with dear friend, Mary Alice Kinkeade. She was a beloved mother and grandmother.

Mrs. Ida Ross was organist and Mrs. Deborah Dienst, vocalist. Special music was "Beyond the Sunset" and "In the Garden".

Visitation was held at Wilson Funeral Home in Kahoka after noon on Friday with family receiving friends from 6-8 p.m.

Memorials were suggested to the Southern Baptist Fellowship Church at Wayland.