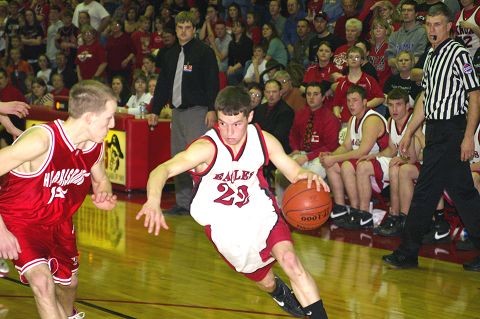 An underdog to many across Missouri team probably opened some of those eyes wide to the resurgence of Knox County Eagle basketball during the March 5, 2008 Class 2 Hannibal Sectional round boys’ basketball game.

The Eagles came out of the gate focused, ready to compete and hardly in awe of a Harrisburg Bulldog team that has proven their metal with a nine year streak of playoff excellence. Harrisburg won a state title in 2006 along with winning seven of their last nine boys’ district championships.

Knox County defended and executed their way to a 20-8 first quarter lead. The Bulldogs had to make plays in order to stay in the game with the Eagles. The battle hardened Bulldogs (25-5, ranked second in Missouri boys’ Class 2) overcame a 13 point deficit and scored with 2.3 seconds remaining in overtime pulling out a 67-65 win.

The blowout some were certainly expecting started to materialize early in the contest, but with a fresh face attached.

“I think their cheering section thought they would come out here and blow us out of the gymnasium,” said Eagle head coach Jesse Crawford. “We took a ten point lead from the number two team in the state.”

“We said that we were here to play. Our guys never gave up. They didn’t come out scared. They came out mentally focused. We were a possession from being in the elite eight. It still stings.”

Knox County defenders were all over the vaunted Harrisburg ball handlers from the opening tip. The Eagles executed offensively and jumped to a 10-4 lead with 4:12 showing on the first quarter clock.

Knox County penetrated the lane well especially in the first half. Harrisburg fueled the Eagle run with turnovers. The Bulldogs shot the ball from the perimeter better in the second quarter, opening up opportunities inside.

Daniel McMahon answered a Bulldog bucket in kind at the 2:36 mark of the first quarter for a 14-6 lead.  Dennis Dent tossed in two free throws for a 16-6 margin with 1:52 showing on the overhead scoreboard clock.

The Eagles held a 20-8 lead as time ran down in the first quarter. Harrisburg made one of several key plays allowing them to remain within striking distance. Junior guard Frank Wanner tossed in a home run ball at the buzzer, changing game momentum and pulling Harrisburg within a 20-11 deficit after eight minutes of play.

Knox County took up where they left off at the beginning of period two. Cory Shultz had a marvelous first half. Shultz slashed to the goal for a 24-13 Eagle lead with 6:22 showing on the second period clock.

More than a quarter of the Hannibal High School Korf Field House crowd was wearing Knox County colors. Some were wearing commerative black shirts printed by KCHS cheer coach Lyndsey Hunter’s H-2 Grafix. Some were Knox County alumni that hadn’t been to an Eagle game for years. Many were students and regular Eagle followers. Together they made a lot of noise.

The police sirens and other sounds made by those in attendance at large community send offs at Edina and Knox City before the game were matched in intensity when Dennis Dent powered in a Knox County bucket for a 28-15 Eagle lead at the 5:11 mark of the second quarter.

Sam Purdy answered with two critical Harrisburg three pointers on successive possessions, trimming the KCHS lead to 28-22 with 3:41 to play in the first half. Zach Parrish answered the quick 8-0 Bulldog run with a key field goal 21 seconds later.

The teams began a thrilling full court race. Senior sniper Taylor Perrigo sank a pair of Harrisburg free throws and converted an offensive board to a 30-26 Eagle lead with 90 seconds showing on the first half clock. Cory Shultz responded for the Eagles for a 32-26 lead at the 1:13 mark of period two.

Post player Max Manning pulled Harrisburg within a 32-28 margin with a minute to play in the first half. The Bulldogs made a break when Taylor Perrigo rebounded a missed shot near the close of the first half. Perrigo sank a Harrisburg free throw with .8 seconds remaining in the quarter for a 32-29 halftime score in favor of Knox County.

Mitchel Penn stemmed the tide when he rebounded the basketball and doubled a two point edge with 4:51 to play in period three. Cory Via and Josh Taylor cashed in second shots tying the score at 39 with 4:20 to play in the third quarter.

Cory Sublett stole the basketball and fed Max Manning capping a six point surge to a 41-39 Bulldog lead with 3:50 showing on the clock. Daniel McMahon evened the score at 41 with a pair of free throws 11 seconds hence.

The sides battled down an intense, evenly played final three minutes of the third quarter. Cory Shultz, Daniel McMahon and Shane Clouse all scored lead switching field goals. Josh Taylor tied the game at 43 with 2:30 to play in the period.

Harrisburg scored the first five points of the fourth quarter. Zach Parrish scored for the Eagles for a 56-51 Harrisburg lead with seven minutes remaining in regulation time.

Knox County roared back with a 10-1 scoring streak. Dennis Dent pulled the Eagles within a point with two free throws at the 3:39 mark of the fourth quarter. Daniel McMahon stole the basketball and put the Eagles back in the lead at 58-57 eight seconds later.

Daniel McMahon sank another KCHS free throw for a 59-57 lead with 2:10 remaining in regulation time. Josh Taylor sank a Harrisburg free throw bringing the margin within a point at the 1:44 mark.

Daniel McMahon sank two more Eagle free throws for a 61-58 lead with 65 seconds to play in the fourth quarter. McMahon poured in a game high 24 points and went 7-8 at the free throw line on the night.

Harrisburg tied the game on a Cory Via free throw with 55 seconds showing on the clock. The fierce Bulldog press forced the ball to the floor. The Bulldogs had the possession arrow and got the ball back after a jump ball was declared with 47.5 seconds to play in regulation time.

The Bulldogs held the ball for the final shot. Knox County defended well and did not allow a good scoring chance. The game went to overtime tied at 61.

Both sides made hard nosed interior plays in overtime. Daniel McMahon answered Mason Hardin’s inside shot with two free throws. Josh Taylor put Harrisburg back on top only to see Daniel McMahon tie the game with a bucket at the 31.6 second mark of overtime at 65 all.

Harrisburg coach Steve Combs worked the ball for the final shot. Knox County played well defensively again. The final play was well executed. Harrisburg worked the basketball along the baseline between the board and the out of bounds marker.

A rocket like pass ended with Taylor Perrigo scoring a Harrisburg lay up with 2.3 seconds showing on the clock. The defending Class 2 third place Bulldogs led 67-65. The Eagles responded with a well executed set of their own.

Cory Shultz passed to Zach Parrish from his baseline to just over mid court. The Eagles called timeout to stop the clock. The officials put 1.7 seconds on the time piece.

Daniel McMahon went for the win. The rock moved toward the goal as the horn sounded. The ball rang off the front of the iron.

Harrisburg players celebrated their hard fought win at mid court. Knox County finished their season with a 19-10 overall record. Knox County pushed the second ranked team in Class 2 to the limit. The Eagles walked from the court to the roar of a standing ovation by their appreciative fans.

“Give a lot of credit to Coach (Jesse) Crawford and those Eagles. I told Coach Crawford after the game that they had out played us 2 to 1,” said Harrisburg head coach Steve Combs.

“We didn’t play well but we found a way to win,” said Coach Combs. “That’s part of (being) a good ball club. We have been down to some pretty good ball clubs and have come back to win. We got up by six and Knox County came back at us.”

“I thought we were ready to play at the beginning, but they are 16 and 17 year old kids,” said Combs. “I was proud of the way we ran the ball down, got a good look and scored at the end. We scored little bit quick. Knox County got a good look, but the ball bounced our way tonight.”

Taylor Perrigo led the Bulldogs with 16 points. Josh Taylor scored 13 of his 14 points in the second half and in overtime. The Eagles held one of the great small school players in Missouri to 12 Cory Via points. Mason Hardin scored nine Harrisburg points.

The Eagles held a 24-20 advantage in made field goals at the end of the game. Harrisburg tossed in five three point shots that were a major portion of the final outcome. Daniel McMahon scored the lone KCHS three pointer. Harrisburg was 12-20 (60%) from the charity stripe. The Eagles went 14-19 for 73.7% from the free throw line on the night.

Daniel McMahon led all scorers with 24 Knox County points, three steals along with three assists. Sixteen of those points came in the second half and in overtime.

Most important of all, both the Knox County boys’ and girls’ teams showed character and competitiveness. Lessons of team work, tenacity and heart were taught and learned.

Five players with significant varsity playing time are eligible to return next season, led by 1000 point scorer and career school rebound record holder Dennis Dent.  Next season will see the basketball districts redrawn. The Eagles could well be in for another banner year for both their boys and 11-14 girls.

“We just played the number two team in the state to the final possession in overtime,” said second year head coach Jesse Crawford. The Eagles are 32-23 with a district title under Coach Crawford after struggling to win eight games a season for 15 years.

Dennis Dent, Daniel McMahon and Cory Shultz were 2007-08 All Tri-Rivers Conference boys’ selections. The Missouri Sportswriters and Sportscasters Association All-District teams will be selected and announced at a later date.

“It stings to lose a game on the final possession,” said Coach Crawford. “It feels good when we look back and reflect on it. The bottom line is our kids poured their hearts out. Our crowd was great. We weren’t going to let up. We weren’t going to give up. We got down five (points) with three and a half minutes left in the game.”

“Two or three months ago, that would have been a loss for us,” said Crawford. “We came back and took them toe to toe until the end. It was a great effort on our part. They are a heckuva team.”

“I had six seniors that poured their hearts and souls out for me the last couple of years,” commented Jesse Crawford. It’s going to be hard to say good bye to some of those guys. They helped me get started in my coaching career.”

“When they look back at this, they are going to reflect the rest of their lives that they were in the top 16 teams in the state. They took the second ranked team in the state down to the wire.”

“That means a lot to our community and to those kids,” said Jesse Crawford. “We hope those younger kids, the fifth, sixth, seventh and eighth graders can look at this and motivate themselves to be in this position.”