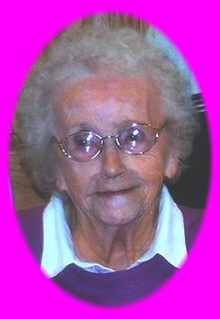 She was born February 4, 1916 in Stockport, IA, the daughter of Winfield Scott and Carrie Inez Lane Hammans.

She was preceded in death by her parents; her husband; and, four sisters.

Betty and Frank and the boys lived on a farm near Granger and Luray until 1958 when they moved to Kahoka. She worked at the Kahoka Public School District as a cook for 20 years, retiring from the Clark Co. R-1 School District in 1978. She enjoyed reading, horses and Garfield the cat. She was an excellent cook and loved to cook for her family. She also loved to quilt, sew and crochet and her family was blessed with gifts of her handiwork She also had a neat sense of humor that left you smiling.

Visitation was held at Wilson Funeral Home after noon on Thursday with family receiving friends from 1 p.m. until time of services at 2.

Memorials were suggested to the Clark Co. Nursing Home.