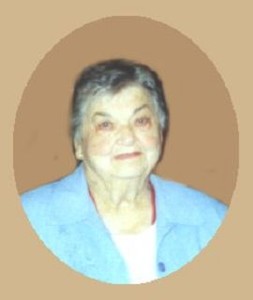 Helen L. Beaird was born in rural Clark County, Missouri, on May 18, 1914, the only child of Marshall and Stella Moore Wood. She died in Blessing Hospital, Quincy, Illinois, on March 12, 2008.

She graduated from Revere High School in 1932, and was the last living member of her graduating class.

She was married to Ernest L. Beaird, the love of her life, on November 27, 1947, and they lived on the family farm near Revere their entire married life. Many good times were shared with family and friends around their kitchen table. They were the parents of two daughters, Barbara and Marsha Jo. Ernest and Helen enjoyed spending time with family and many friends, traveling, playing cards, country rides, and doting on their grandchildren. Her grandchildren will always remember her as a loving grandmother, a great cook, ready for fun, and always willing to take a ride on the 4-wheeler.

Helen had been a school teacher in Clark County for 30+ years and held a B.S. degree from Culver Stockton College. She began her teaching career in a one-room schoolhouse, Cedar College School, and she still enjoyed visiting with some of her first students. She later taught in Revere, Kahoka, and Wayland public schools and often recalled many happy memories of her teaching days. In some instances, she taught several generations of the same family. Many of her former students remained in contact with her and remembered her as their favorite teacher.

She learned to play the piano at an early age and played for many, many weddings, funerals, and community activities over the years including a local dance band in the 1940’s.

Music was always a vital part of her life. She had been the organist at the Revere Community Church where she was a life-time member, and belonged to the Ladies’ Missionary Society.

She was a long-time member of the Delphinium Garden Club where her mother had been a charter member. The friendships developed and shared were always cherished.

Ernest died in 1996, and Helen moved to senior housing in Kahoka in 1999 where she enjoyed many friends and activities. She participated in bingo and birthday parties, and was always ready for a card game or visitors.

Her family members who will greatly miss her and the love she so freely gave them include: daughters, Barbara and her husband Jerry Neyens of Kahoka; Marsha Jo and her husband Dan Springer of Fayetteville, Georgia; grandchildren, Kari and her husband Mike Bevans of Kahoka; Erin Neyens and her fiancé, Collin McCarty, of Columbia, Missouri, John Neyens of Quincy, Illinois, and his fiancé, Shawn Kendrick of Salisbury, Missouri; Joel Springer and his wife Jessica of Vicenza, Italy; Justin Springer of Manhattan, Kansas; great grandchildren, Grant and Garrett Bevans and Aidan and Ava Springer.

Visitation was held after 4:30 p.m. Thursday at Wilson Funeral Home with family receiving friends from 6-8 p.m.

Memorials were suggested to the Revere Cemetery.