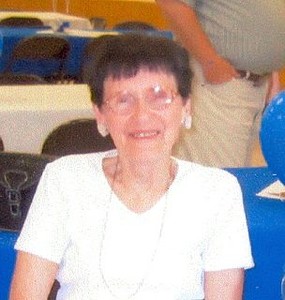 Mrs. Wiskirchen graduated from Ewing High School in 1943.  She left soon after high school for St. Louis where she was employed at the Emerson Electric Company doing war work.  Later she attended Gem City Business College, and held a position in the office of the Davis Cleaver Company in Quincy.  She was a homemaker, assisting her husband on the family farm.  She then worked for the Lewis County School District for 32 years as a school secretary at Ewing Elementary and Highland High School.  She enjoyed working in her vegetable garden and yard.  She was a talented seamstress and made many beautiful articles of clothing and quilts for her family.  She loved spending time with her family and friends.

She was preceded in death by her husband, Clarence, two brothers, Russell in infancy and J.C. Richter, and a sister, Martha Foerder.

A Mass of Christian Burial will be held Monday, March 17, 2008 at 10:00 a.m. at the Queen of Peace Catholic Church in Ewing with Father Richard Frank officiating.  Burial will be in Queen of Peace Cemetery.  Visitation will be held Sunday, March 16, 2008 from 4 until 8 p.m. with a Vigil Service at 7:30 p.m. at the Ball-Davis Funeral Home in Ewing.

The family suggests memorials be made to the Lewis County Nursing Home Auxiliary Whispering Memories Garden.

Online condolences may be left at davisfh.com.