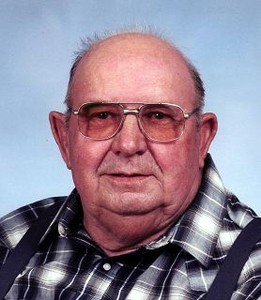 He was born May 8, 1925, in Knox County, Missouri the son of Harley William and Gertrude Luticha McGraw Parrish.

On May 8, 1949, he was united in marriage to Mary Lou Rhoades at Kirksville, Missouri and she preceded him in death on February 18, 1996.

He was also preceded in death by his parents, one daughter, Tina Parrish and three sisters Ada Bell Hall, Catherine Marie Parrish and Dorothy Hart.

Junior was raised in Knox County where he received his education in rural schools.  He was engaged in farming all his life southeast of Novelty, Missouri and in 1973 moved to Novelty, Missouri.  He was also employed with the Missouri Department of Transportation in Novelty, Missouri for 19 years retiring in 1987.  Junior enjoyed spending time with his family and friends.

Expressions of sympathy in memory of Junior Parrish may be made to the Novelty Christian Church and may be left at or mailed to the Hudson Rimer Funeral Home, P.O. Box 1, Edina, MO  63537.