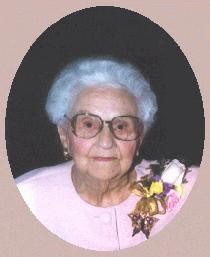 Clio Myra Morgan Wilson, age 102, of Kahoka, MO, died peacefully on Monday, March 31, 2008, at the Clark Co. Nursing Home in Kahoka where she had been a resident since October of 2007.

She was born June 2, 1905 in Wyaconda, MO, the daughter of Morris and Winifred Broadwell Morgan.

Survivors include a grandson, Edwin Wilson and his wife, Kathy, of Kahoka; three great- grandchildren: Jennifer Frazee and her husband, Adam, of Kahoka, Janet Hardin and her husband, Adam, of Kahoka, and David Morgan Wilson and his wife, Tessa, of Manhattan, KS; three great-great grandchildren: Nathan and Emily Frazee and Isaiah Hardin; a nephew, and two nieces and their families: Bill Morgan and his wife, Kay, of Keokuk, Carolyn Peters of Keokuk and Ann Morgan of Columbia; and other relatives.

She was preceded in death by her parents; her husband; and son and daughter-in-law, Kenneth and Donna BeGole Wilson.

Clio grew up in Wyaconda and it was always home to her no matter where she lived. She graduated from Wyaconda High School and at her death was the oldest living graduate. She then graduated from Lindenwood College in St. Louis. While in Wyaconda, she started a group for teenage girls and held ice cream socials on her parents lawn to raise money for their activities. She met her future husband, a Service Pipe Line worker, and they were married and became the proud parents of a son, Kenneth Morgan Wilson. Following their marriage, she gave piano lessons to many Clark County residents and later in LaPlata where she made her home until 1995 when she moved to Kahoka to be closer to her great-grandchildren and their many activities. Around 1952 she decided she needed to be more creative and started china painting as a hobby. It soon grew into a full time occupation. She conducted weekly classes in china painting, later on canvas and her pieces became collector s items. Clio enjoyed traveling around the world, painting, and had a special interest in people and their activities. She was extremely proud and encouraging of her great grandchildren and their families.

Funeral services will be held Saturday, April 5, 2008, at 10 a.m. at Wilson Funeral Home in Kahoka with Pastor Shawn McAfee officiating. Burial will follow in the Wyaconda Cemetery.

Friends can call at Wilson Funeral Home in Kahoka after 10 a.m. Friday with family receiving friends from 5-6:30 p.m.