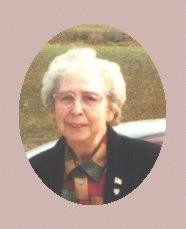 She was born September 11, 1926, at Williamstown, MO, a daughter of Joseph Stafford and Margaret Alice Smith Walker.

On April 27, 1947, she was united in marriage to Jerry D. Lillard at her step-father s home in rural Luray.

She was preceded in death by her parents and step-father, Albert Snider; her husband; a grandson, James Robert Simmons; and a nephew, Benny Bourgeois.

Mary graduated from Williamstown High School and in 1976 received her B.S.E. from Truman University. For 11 years she was secretary/ bookkeeper for the former R. J. Hurley Lumber Co. which was managed by her husband. She taught in the Clark County School District for 25 years before retiring. She was a member of the First Baptist Church and the Winsome Sunday School Class, and of the Missouri and Clark Co. Retired Teachers.

For many years Mary taught 5 year olds in Sunday school and enjoyed teaching them. She truly enjoyed her years as a school teacher. She treasured the friendships with her co-workers and considered them friends for life.

Raising flowers and playing dominoes were two of her favorite past times. Mary’s favorite times were being with her family. She cherished the time spent with her grandchildren and great-grandchildren. Her passing leaves a void that will never be filled.

Funeral services will be held Thursday, April 3, 2008, at 10 a.m. at the First Baptist Church in Kahoka with Rev. Gary Payne officiating. Burial will follow in the Providence Cemetery, Williamstown, MO.

Friends can call at Wilson Funeral Home in Kahoka after noon on Wednesday with family receiving friends from 6-8 p.m.

Memorials are suggested to the Kahoka First Baptist Church or the Clark Co. Local Cancer Fund.