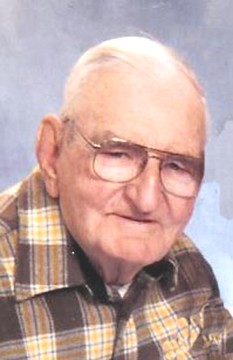 Walter Gilbert Fredrick (Swede) Carlson, of Novelty, Missouri, died Monday, April 21, 2008, at the Knox County Nursing Home at 93 years of age.
He was born January 11, 1915, at Peoria, Illinois, the son of Elmer and Elfreda Nelson Carlson. His mother died when he was two and he taken care of by older sisters until he was eight when he went to live with the Gronewold family, where he stayed until he was 21 years old.
In 1939, he married Ida Reynolds and to this union one daughter was born. On April 25, 1980, at Edina, Missouri he was united in marriage to Patricia Spencer Begner and gained two step-children.
Swede was inducted into the Army in 1943, and gained the rank of Master Sergeant serving as a tank commander in the 2nd Armored Division in the European Theater. He received the Purple Heart and Silver Star during his service. He was discharged in December of 1945.
He was employed in several jobs, the main one being in charge of migrant labor at Princeville Canning Company, but last working in Minnesota in an automotive service company. He moved to Novelty in 1980, where he was a handyman, also mowing many yards in town and cemeteries.
Surviving are his wife Pat Carlson of Novelty, Missouri, one daughter, Vicky Hill and husband John of Lake Villa, Illinois, step daughter, Linda Burns and husband Doug of Beverly, West Virginia, a step son David Begner and wife Debbie of Galesburg, Illinois, six step-grandchildren, seven step-great grandchildren, a sister, Velma Ritter of Chillicothe, Illinois, a sister-in-law Verlys Carlson of Morton, Illinois, the Gronewold sisters and brothers, nieces, nephews, in-laws and friends.
He was preceded in death by his parents, three brothers and four sisters. He was a member of the V.F.W. Post # 4822 at Edina and attended the Locust Hill Community Church.
Funeral services were held Friday, April 25, 2008, at the Hudson-Rimer Funeral Home in Edina, Missouri. Services were held by Reverend Reese Blaine and Reverend Bill Gaines. Burial with full military honors was in the Locust Hill Cemetery.
Casket bearers were John David Parsons, Eugene Brenizer, Weldon Beach, Tom Hamlin, Donald Hall and Gary Kaser.
Expressions of sympathy in memory of Walter (Swede) Carlson may be made to the Hospice of Northeast Missouri or Novelty Senior Center. Memorials may be left at or mailed to Hudson-Rimer Funeral Home, P.O. Box 1, Edina, Missouri, 63537.
HUDSON-RIMER
FUNERAL HOME