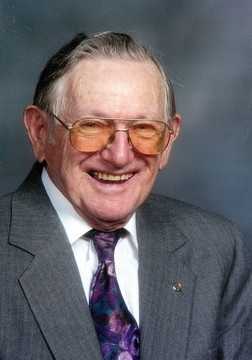 Damond Browning, age 93, of Knox City, Missouri, died Friday, April 25, 2008 in Lewis County.
He was born in Knox City, Missouri on August 21, 1914, the son of David and Nelle Thomas Browning.
He was united in marriage to Lucille Lindsey on March 24, 1940, and she preceded him in death on March 19, 1980. He was also preceded in death by his parents, one brother, Thomas Lee Browning and one son Rodger Dean Browning.
Surviving are two sons, Tony Lee Browning and wife Connie of Knox City, Missouri and Sandy Gene Browning and wife Janice also of Knox City, three grandchildren, Heather Schrage and husband Jeremy of Edina, Missouri, Michael Browning and wife Rachael of Knox City, Missouri, and Rex Browning and wife April of Knox City, Missouri, four step grandchildren, four great grandchildren and eleven step great grandchildren.
Damond lived his whole life in and just North of Knox City where he farmed his whole life, for many years he also milked cows and his father and children delivered milk and cream to the residents of Knox.
He was a Dekalb seed corn salesman for over 40 years. He was a life long member of the Knox City Christian Church serving in many positions including Elder for over fifty years.
He served on the cemetery and Senior Housing boards for several years. He served as a board member of the Knox City School and drove a school bus for the Knox County School District for many years, and was also active in the Knox County Farm Bureau.
Funeral services will be held 11 am Tuesday, April 29, 2008, at the Hudson-Rimer Funeral Home in Edina, Missouri. Officiating the services will be Dr. Dale Jorgenson and Reverend Dewayne Wellborn. Burial will be in the Knox City Cemetery. Music will be provided by Rita Worthington, soloist and Margaret Parrish, organist. Casket bearers will be J.V. Norton, Scott Wolter, Larry Goodson, Verlin Tonnies, Bill Lewis and John Will Nicol.
Expressions of sympathy in memory of Damond Browning may be made to the American Cancer Society. Memorials may be left at or mailed to Hudson-Rimer Funeral Home, P.O. Box 1, Edina, Missouri, 63537.
HUDSON-RIMER
FUNERAL HOME