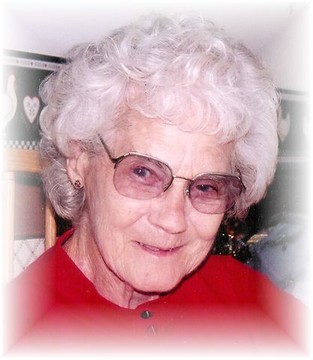 Lucille Cone, 86, of Memphis, Missouri, died Tuesday, May 6, 2008, at the Scotland County Memorial Hospital.
She was born June 14, 1921 in Knox County, Missouri, to James Lloyd and Cora Russie Jones Binkley. She attended school in Edina, Missouri. Following school, she spent several years doing child care.
She married James Orin Cone on December 31, 1948, in Memphis, Missouri. He preceded her in death on March 22, 1987. To this union a son, John Lloyd Cone, was born on August 3, 1949, and died on December 27, 1949. Johnny was born premature and only weighed three pounds and two ounces. Lucille was a homemaker and helped her husband operate their business of hauling water.
She was a member of the Memphis First Christian Church and the Ladies Auxiliary of Wallace W. Gillespie Memorial Post #4958 VFW.
Lucille loved life and loved her family and many friends. She enjoyed gardening, working with her flowers and her yard. She enjoyed helping people can fruits and vegetables when the harvest was bountiful. She will be remembered by her neighbors, mostly for her well groomed yard.
She is survived by two brothers; George Robert (Bobby) Binkley and his wife, Eleanor, of Edina, Missouri, and James Louis (Tiny) Binkley and his wife, Norma, of Fort Madison, Iowa, and two sisters; Doris Kathleen (Peggy) Hayes and her late husband, James, of Fort Madison, Iowa, and Mabel Thelma Florea and her husband, James, of St. Louis, Missouri; four nieces, two nephews and a number of great nieces and nephews. Also surviving are several persons she helped raise as her “special children”; James Dale and Linda Baker, Conie Baker, Mike and Jane Walker, Mitch and Terri Walker and Glenda Jo and Larry Miller as well as numerous grandchildren and great-grandchildren.
Visitation was held on Friday, May 9, 2008 until the time of the funeral service at 2:00 P.M. at the Memphis Funeral Home. Brother Larry Smith led the service. Burial followed in the Sunnyside Cemetery in Milton, Iowa. Casket bearers were James Floyd Baker, Jimmy Hayes, Adam C. Baker, Bobby Small, Mase Binkley, David Smith and Josh Thudium.
Memorials may be made to the Scotland County Cancer Fund or Sunnyside Cemetery.
Arrangements were under the direction of the Memphis Funeral Home.