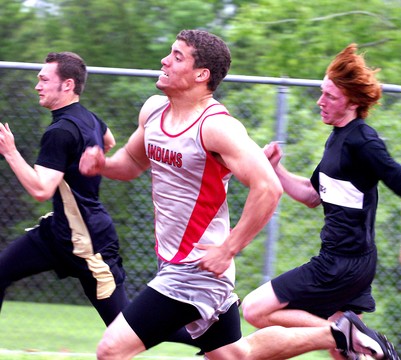 Javis Vineyard qualified for the May 16-17 MSHSAA Class 1 and 2 Track Championships in three events leading Clark County advancers at the May 10, 2008 Class 2 Sectional 1 at South Callaway. The meet was halted twice due to lightning and storms rolling through the Fulton area.
Clark County won the boys’ 4x200m relay in a driving rainstorm. Matt Morrow, Michael Brennan, Ethan Allen and Javis Vineyard powered through nasty weather conditions to the Sectional gold medal. Javis Vineyard was ahead of the field by six to eight meters at the finish line.
The South Callaway Sectional was not concluded until about 9:15 PM. Clark County won fourth place in the 4x400m relay marking the final event of the day. Michael Brennan, Ethan Horton, Ethan Allen and Lynn Williams were the Indian 1600 meter relay runners.
Official sectional results were not posted as of late Sunday night. Please check the Internet at www.mo.milesplit.us for times and distances. The large crowd cleared the facility very quickly at the end of the meet due to more severe thunderstorms on the way.
Some information contained in this story is from reporter’s notes. The top four finishers at the Sectional round advanced to the state track meet.
Erick Arnold advanced with a fourth place finish in the boys’ 110m hurdles. Clark County did not qualify any girls to the 2008 Sectional. All Clark County athletes mentioned in this story ran in the Class 2 portion of the Sectional track meet.
Javis Vineyard won bronze medals for a third place finish in the 100 and 200 meter dash races. Vineyard was part of the Indian 800m relay team.
“We ran pretty well in the 4×4 and finished third,” said Clark County coach Matt Smith after the final event. “Javis (Vineyard) ran well in the 100 and 200 meter dashes. We are just glad he can be healthy down the stretch.”
Javis Vineyard missed two or three weeks earlier in the season with a hamstring injury. “We are much stronger in the 4×100 and 4×200 meter relays with Javis healthy and able to compete. Mason Owen stepped in and ran with those kids and did a great job for two or three weeks.”
“The 4×1 was such a tight race,” said Coach Smith. “All eight teams ran pretty much together. At this level, it’s all about the exchanges. We had a couple of slow exchanges and it knocked us out of the top four. Those things happen.”
“You have to feel good about the 4×2 team’s chances,” when Matt Smith was asked about the Indians’ state track meet prospects. “They have pretty much won all year. We had a bad third exchange that I thought would really cost us. We wound up winning by six meters. None of the times at this sectional were very strong. You can set that on the weather. It comes down to your kids having a great day down there.”
Knox County qualified in nine Class 1 events. Lorelei Schlueter and Amanda Woods will compete in four events at the girls’ Track Championships. The two time defending district champion Lady Eagles are coached by Clark County alum John Weaver. Knox County won the girls’ 4×200 meter relay Sectional Championship. Eight athletes will represent Knox County at Jefferson City.
Christina Scudder (discus) Kale Watson (110m hurdles), David Anderson (400m dash) and Justin Hazen (3200m run) will represent Brashear High School at the Class 1 championships. Kale Watson won the Class 1 boys’ 110m hurdles Sectional Championship.
Highland senior Josie McCracken will compete in the girls’ Class 2 100, 200 meter dash events and as part of the Lady Cougar 4×100 and 4×200 meter relay teams. Chasity Wardlow, Alexis Clay and Abbie Gaus make up the remainder of the Highland sprint relay teams.
Novinger athlete Aric Luman qualified in the Class 1 boys’ 100, 200 meter dash races along with the long and triple jump. Dakota Jacques made the Class 1 boy’s 100 meter dash and long jump field. Cory Smith will represent the Wildcats in the boy’s discus.
Matt Morrow, Erick Arnold, Ethan Allen and Javis Vineyard finished sixth in the boys’ 4×100 meter relay. Michael Brennan heaved the shot put 42′ 5 ½” but could not crack the top four.
Lynn Williams finished sixth for Clark County in the boys’ 400 meter dash.