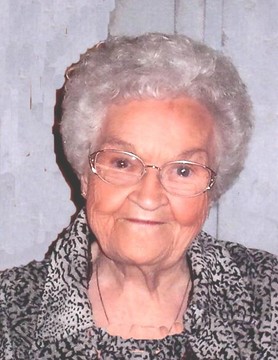 Elva Maude Cockrum, age 97, of Edina, Missouri died Thursday, May 15, 2008, at the Knox County Nursing Home in Edina, Missouri.
She was born October 3, 1910, the youngest and second daughter of Willis Wilbur and Gertie Mae Thompson Whiteaker at Wellsville, Missouri, where she resided until the family moved to Knox County in 1926, where she continued her education, graduating from the Knox City High School.
She joined the Christian Church at Middletown, Missouri and was baptized at Montgomery City, Missouri in November of 1925, and then transferred her membership to the Edina Assembly of God Church in 1987.
Maude was united in marriage to Alfred Boltz on February 1, 1927 and to this union three children were born, Betty Jean Scott, Elvadean Rowe and Lyman Alfred Boltz. They resided on a farm in the Bee Ridge vicinity until the death of Alfred on February 23, 1945. Maude and her family then moved to Edina, Missouri where she was employed by the Wells Lamont & Burnham Glove Factory for seventeen years. She also served as Edina City Collector for twelve years, retiring in 1965. On April 25, 1948, she was united in marriage to Paul Cockrum at Mokane, Missouri by the Reverend O.B. Hobbs, former minister of the Edina Assembly of God Church.
She and Paul took many trips, enjoyed just being together, working hand in hand together in the garden and around the house, baby-sitting their grandchildren and helping neighbors and friends. Paul passed away October 22, 1986. She was also preceded in death by her parents, one son, Lyman Boltz; a sister, Viola Porter; and a nephew, Donald Porter.
Maude was a member of the Matilda Chapter # 411 Order of the Eastern Star for more than 50 years. She received her 50-year pin in 1999. She held an office over 40 years, the last twelve as Chaplin before retiring in 2000. She did volunteer work at the blood mobile, nutrition site, and for the American Cancer Society. She enjoyed her family and friends, cooking, quilting, knitting, crocheting, gardening, canning and sharing her vegetables.
Surviving are her daughters, Betty Jean Scott of Lees Summit, Missouri and Elvadean Rowe of Mesa, Arizona; four grandsons, Kevin Parrish and his wife Susan of Phoenix, Arizona, Steven Parrish and his wife Mary of Alta Loma, California, Garry Boltz and his wife Elizabeth of Roanoke, Texas, and Larry Boltz and his wife Suzanne of Copper Canyon, Texas; three great grandchildren, Nicholas Boltz, Christopher Boltz and Christina Boltz; two nieces, Dorothy Gronek and her husband Bernard of St. Peters, Missouri and Clem Porter of Knox City, Missouri, numerous great nieces and nephews and a daughter-in-law, Goldie Goodwin Boltz Kelly.
Funeral services were held Monday, May 19, 2008, at the Hudson Rimer Funeral Home in Edina, Missouri. Reverend Robert Stephens officiated the services. Burial was in the Park View Memorial Gardens in Kirksville, Missouri.
Casket bearers were Kevin Parrish, Phil Stitzer, Garry Boltz, Mike Peters, Elmer Brown, Larry Boltz, Dennis Briscoe and Steven Parrish. Honorary bearer was Bernard Gronek.
Eastern Star services were held on Sunday, May 18, 2008 in the Chapel, conducted by Matilda Chapter #411 O.E.S.
Expressions of sympathy in memory of Maude Cockrum may be made to the Order of the Eastern Star, Matilda Chapter #411 or Hospice of Northeast Missouri. Memorials may be left at or mailed to Hudson Rimer Funeral Home, P.O. Box 1, Edina, Missouri 63537.
HUDSON-RIMER
FUNERAL HOME