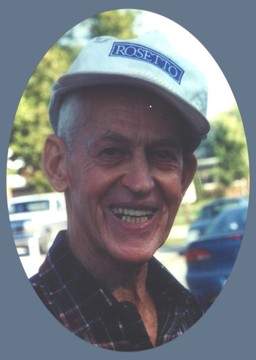 He was born June 28, 1916 in Clark County, MO, a son of Leo G. and Grace Kaiser Waggener. He married Virginia Lorene Lillard on June 14, 1941 in Trenton. To this union two sons were born.
He was a member of the First Baptist Church of  Kahoka and attended when he could over the years until the loss of his hearing prevented him from enjoying the service.

Leo was an avid gardener and raised lots of vegetables and beautiful flowers every year.
He graduated from Kahoka High School and attended the University of Missouri.
He farmed until 1938, was a jack of all trades for a while, then started working for Curtis Candy in Trenton, MO, in 1939. While working for Curtis Candy he signed up for the Air Force in 1942, started active duty on February 1, 1943. He was sent to Michigan State College for Cadet Training and was placed in Altitude Training where he worked with pilots, co-pilots and navigators. He served until 1946 then resumed his jobs with Curtis Candy. There he worked his way up to District Manager Supervisor of Sales for Mo, Ia, and Il. When Curtis Candies was sold to Standard Brands he went to work for Mays Department Store as Supervisor of Sales for the Tri-States until his retirement in 1982.

Wilson Funeral Home in Kahoka with Rev. Gary Payne officiating. Special music was recordings “How Great Thou Art”, and “Amazing Grace” and piano selection, “On Eagle’s Wings”.
Pallbearers were Jeff Wood, Dave Wood, Byron Waggener, Colby Waggener, Bill Ragan and Allen Courtney.
Burial with military rites was in the Kahoka Cemetery.
Visitation was held at Wilson Funeral Home after 9 a.m. Friday with family receiving friends from 10 a.m. until time of service.
Memorials were suggested to the donor’s choice.
On-line condolences may be expressed at www.timeformemory.com/wilson